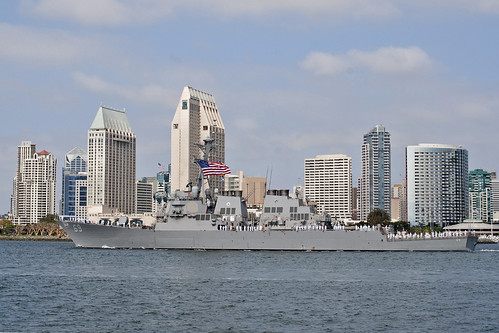 The Arleigh Burke-class guided missile destroyer will join FDNF-J as part of the U.S. 7th Fleet, bringing some of the most technologically advanced warfighting capability to the Indo-Pacific region.

In the past year, the crew completed a challenging training cycle and conducted a Combat System Ship's Qualification Trials after receiving major upgrades to the Aegis Combat System, undersea warfare, and electronic warfare suites.

"I could not be prouder of this crew and their accomplishments leading up to this day," said Cmdr. Jennifer Pontius, the commanding officer of Milius. "This crew is incredibly excited to operate in the 7th Fleet area of operations and bring additional combat capability to the FDNF team."

Becoming part of FNDF-J is a significant change in the lifecycle of the ship and Milius' crew has worked hard throughout the planning process to ensure a smooth transition overseas. The transition will be a professional one for the crew, but it is also a personal change for many Sailors who are moving their families overseas to a new country.

"I'm looking forward to my time in Japan, but I think my family is even more excited about the move," said Fire Controlman First Class James Boland. "They are really looking forward to the opportunity to experience the people, culture and life in Japan."

During its transit across the Pacific Milius and her crew will conduct training evolutions and make several stops before arriving in Yokosuka later this summer.