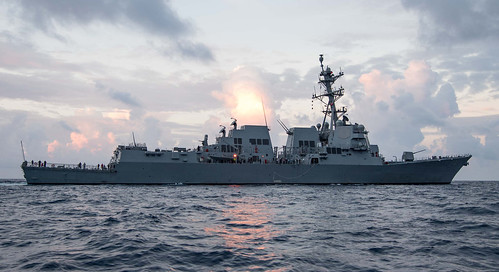 In this file photo, the future USS Ralph Johnson (DDG 114) operates in the Gulf of Mexico during builder's sea trials in July 2017. (U.S. Navy/Andrew Young)

Ralph Johnson was commissioned for active service on March 24 in Charleston, South Carolina.

The ship’s commanding officer, Cmdr. Jason Patterson, leads the core crew of 314 officers and enlisted personnel. The Sailors and accompanying families have been gradually relocating to the area since last summer.

“The officers and crew of USS Ralph Johnson are thrilled to be joining the Pacific Northwest Navy,” said Patterson. “Our arrival to our homeport of Everett, Washington, marks the end of an over two year journey for the crew through the precommissioning process. We look forward to joining our fellow shipmates on the Everett waterfront.”

Ralph Johnson is the 64th Arleigh-Burke class destroyer built by Huntington Ingalls Industries in Pascagoula, Mississippi. It is the first warship named for Medal of Honor recipient Marine Pfc. Ralph Henry Johnson. Pfc. Ralph Henry Johnson was posthumously awarded the Medal of Honor for his heroic actions during the Vietnam War. Johnson used his body to shield two fellow Marines from a grenade, absorbing the blast and dying instantly in March 1968.

Naval Station Everett’s mission is to provide a secure platform for Navy and Coast Guard forces, important mission capabilities, and quality of life for service members and their families. The base provides assistance to its homeported ships such as transition services, family programs, and community resources to help them get settled in their new home.