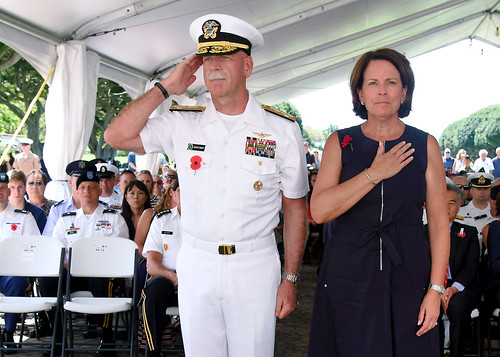 ANZAC Day was established in 1916 to celebrate the soldiers that gave their lives on the front line of the battle of Gallipoli, in Turkey, the first major military action fought by the two countries in World War I.

Throughout the years, ANZAC Day has since become a commemoration for all military members who have lost their lives during military and peacekeeping operations and is celebrated every year around the world on April 25.

During the ceremony, guest speakers shared stories and talked about the history of ANZAC Day and how it has changed over the years.

“Just as the Gallipoli campaign forged New Zealand’s relationship with Australia, the war in the Pacific crystalized our relationship with the United States, together we understood we shared values and a determination to create a better world by developing a framework that enabled peace,” said Rear Adm. John Martin, the chief of New Zealand Navy.

“The meaning of Anzac Day has evolved to reflect our society. New Zealand stands alongside Australia around the world to remember the Gallipoli campaign. We also stand with our friends and partners of other conflicts and share this act of remembrance and recognize where our interests and values intersect. In this, the final centenary year of World War One, we acknowledge the role this conflict, and others, played in shaping our nations. We stand here this morning, as we have done in years past, and as we will do in the future, to honor the service and sacrifices made, to pay tribute and to remember,” said Martin.

As part of the ceremony, Swift and others laid wreaths and rendered honors as a way to show their appreciation for the Australia and New Zealand's Army Corps.

"It was an honor to participate in the ANZAC Day commemoration events and see the shared history and deep respect built over the past century on full display,” said Swift. “We remain committed to bolstering the already-strong defense ties between Australia, New Zealand and the United States, and will continue to work shoulder to shoulder with these great nations to maintain security, stability and prosperity within the Pacific region."