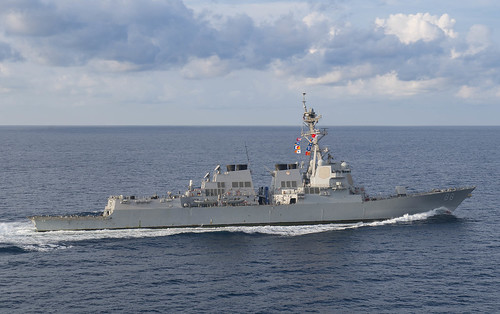 PEARL HARBOR - The guided-missile destroyer USS Preble (DDG 88) returns to its homeport, Joint Base Pearl Harbor-Hickam, April 27, after more than six months on a deployment to the U.S. 5th and 7th Fleet areas of operation.

While deployed, Preble conducted security, stability and freedom of navigation operations throughout the Arabian Sea, Indo-Pacific region, and surrounding waters.

"I am extremely proud of the hard work and dedication Preble's Sailors have exhibited this deployment," said Cmdr. Allen Maxwell Jr., commanding officer of Preble. "We started this deployment ready to take on any mission that came our way, and we have done just that. This crew showed an incredible amount of resiliency and proved that we are dedicated to achieving mission success and greatness in everything we do."

Preble kicked off its deployment participating in a three carrier strike force exercise. which included the TRCSG, the USS Nimitz (CVN 68) and USS Ronald Reagan (CVN 76) carrier strike groups and the Japan Maritime Self-Defense Force and Republic of Korea navies, sailing in close formation with more than a dozen other ships.

Preble made international news when the crew of an MH-60R Sea Hawk helicopter assigned to HSM 37 spotted an Iranian vessel in distress approximately 60 miles off the coast of Iran, Dec. 16.

Preble’s crew manned a firefighting and dewatering team, engineering team, and visit, board, search and seizure team, as well as the small craft action team to stand a vigilant watch in case of hostile interactions.

Preble also conducted a passing exercise with the Indian Navy Talwar-class frigate INS Tarkash (F50). During the exercise, Sailors from both ships traded places for the afternoon as the ships practiced sailing in close formation.

Preble executed port visits to Agat, Guam; Manama, Kingdom of Bahrain; Jebel Ali, Dubai; Changi, Singapore; and Manila, Republic of the Philippines. While in port, Sailors volunteered in local communities, participated in Morale, Welfare and Recreation tours, and experienced the culture of each location.

Sailors also put together care packages for victims of the Mayon volcano eruption in the Philippines; chopped vegetables at Willing Hearts Soup Kitchen in Singapore; and interacted with students at Marshall A. Sablan Elementary School in Guam.

Sailors who participated in the events also said they found it rewarding to give back to the communities they visited while in port.

Preble was deployed to the U.S. 7th and 5th Fleet AORs with the aircraft carrier USS Theodore Roosevelt (CVN 71), the flagship of CSG 9, along with the guided-missile cruiser USS Bunker Hill (CG 52), and guided-missile destroyers USS Halsey (DDG 97), USS Higgins (DDG 76) and USS Sampson (DDG 102). The TRCSG deployment is an example of the U.S. Navy's routine presence in waters around the globe, displaying commitment to stability, regional cooperation and economic prosperity for all nations.