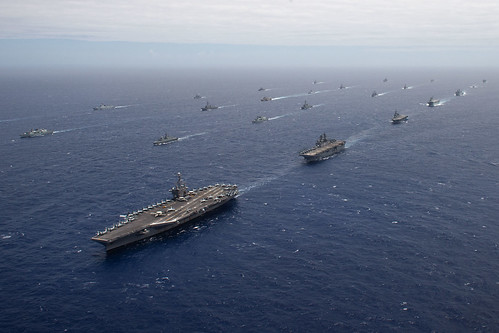 In this file photo, ships from the U.S. Navy and international partner nations steam in close formation during RIMPAC 2016. (U.S. Navy/MC1 Ace Rheaume)

UPDATE, June 27, 2018: Due to a change in operational schedules, Brazil will not be participating in RIMPAC 2018, but remains interested in a future opportunity to participate in the exercise. Brazil was not slated to participate in the Hawaii portion of RIMPAC. We value our partnership with the Brazilian Navy and look forward to operating with them in the future.

SAN DIEGO - Twenty-six nations, 47 surface ships, five submarines, 18 national land forces, and more than 200 aircraft and 25,000 personnel will participate in the biennial Rim of the Pacific (RIMPAC) exercise scheduled June 27 to Aug. 2, in and around the Hawaiian Islands and Southern California.

As the world's largest international maritime exercise, RIMPAC provides a unique training opportunity designed to foster and sustain cooperative relationships that are critical to ensuring the safety of sea lanes and security on the world's interconnected oceans. RIMPAC 2018 is the 26th exercise in the series that began in 1971.

This is the first time Brazil, Israel, Sri Lanka and Vietnam are participating in RIMPAC. Additional firsts include New Zealand serving as Sea Combat Commander and Chile serving as Combined Force Maritime Component Commander. This is the first time a non-founding RIMPAC nation (Chile) will hold a component commander leadership position. This year will also feature live firing of a Long Range AntiShip Missile (LRASM) from a U.S. Air Force aircraft, surface to ship missiles by the Japan Ground SelfDefense Force, and a Naval Strike Missile (NSM) from a launcher on the back of a Palletized Load System (PLS) by the U.S. Army. This marks the first time a land based unit will participate in the live fire event during RIMPAC. RIMPAC 18 will also include international band engagements and highlight fleet innovation during an Innovation Fair.

Additionally, for the first time since RIMPAC 2002, U.S. 3rd Fleet's Command Center will relocate from San Diego to Pearl Harbor to support command and control of all 3rd Fleet forces in 3rd Fleet's area of responsibility to include forces operating forward in the Western Pacific. The Fleet Command Center will be established at a Deployable Joint Command and Control on Hospital Point for the first part of the exercise and then transition to USS Portland (LPD 27) for the remainder of the exercise.

This robust constellation of allies and partners support sustained and favorable regional balances of power that safeguard security, prosperity and the free and open international order. RIMPAC 2018 contributes to the increased lethality, resiliency and agility needed by the Joint and Combined Force to deter and defeat aggression by major powers across all domains and levels of conflict.