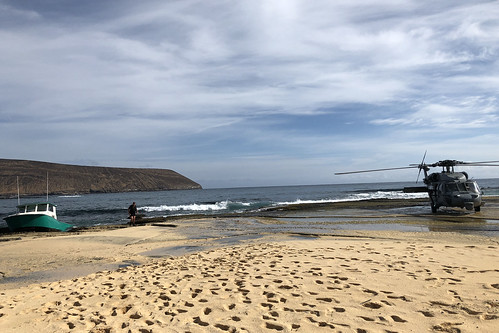 HONOLULU - The U.S. Coast Guard and U.S. Navy responded to a vessel in distress on the northern side of Niihau Island, July 27.

"This case illustrates the partnerships we enjoy in Hawaii as the Navy was quick to respond and get this mariner to a higher level of medical care," said Ensign Seth Gross, command duty officer with Coast Guard Sector Honolulu. "The Coast Guard's role now is to assess the vessel and work with the owner as available to mitigate any impact to the environment from the fuel and batteries aboard."

Pollution responders report the 34-foot vessel partially submerged with no debris or pollution visible at this time. The Coast Guard is working with the owner's representative and State agencies to determine the best course of action to minimize damage to the environment. Based on best available information, the vessel has diesel fuel and other engine oil aboard with a maximum capacity of 410 gallons.

The vessel was operating in 5-foot seas at the time of the grounding. The crew of the aircraft carrier USS Carl Vinson (CVN 70) rescued the mariners after the vessel ran aground.

Carl Vinson was operating seven miles from the vessel when bridge watchstanders heard the distress call and offered assistance. HSC-4 transported four of the mariners to a U.S. Coast Guard facility on the island of Kauai. The fifth mariner was flown to a local medical facility for evaluation.

"We were ready," said Capt. Matt Paradise, Carl Vinson's commanding officer. "When nearby mariners needed assistance, we stepped up immediately and helped. That is what we are trained to do, and I'm proud of our team."

Carl Vinson is conducting training missions in the Pacific Ocean as part of the Rim of the Pacific (RIMPAC) exercise. The carrier supports more than 5,000 Sailors and 70 aircraft from Carrier Air Wing 2. Carl Vinson also serves as the flagship for Commander, Carrier Strike Group 1.

RIMPAC is the world's largest international maritime exercise and offers a uniquely complex and challenging multinational environment for forces to hone their skills. Participants this year include more than 25,000 personnel from 25 nations.