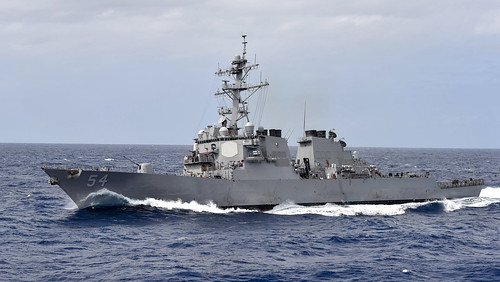 During a ship's Basic Phase, the crew trains and is evaluated on basic ship handling and operations to include damage control, engineering and seamanship. Basic Phase events also emphasize tactical proficiency in the areas of electronic warfare, strike warfare, surface warfare, air warfare and undersea warfare.

"I am immensely proud of the Curtis Wilbur team," said Cmdr. Zac King, Curtis Wilbur's commanding officer. "Their absolute commitment to the training process and focus on our preparedness for operations at sea has placed us in a position to be ready. Our greatest accomplishment through it all was that we did it together, we looked out for each other and this team never quit."

Through the teamwork of Curtis Wilbur's crew, the ship was able to complete all the necessary training and certifications needed to be Basic Phase complete.

"Safely and successfully completing certification events for 18 mission areas in only 18 weeks...is even more impressive when you think that CONUS (continental United States) based ships have 25 weeks to do the same," said Zachary Northcutt, Curtis Wilbur's training officer.

In the last nine months, six ships in the U.S. 7th Fleet area of operations have completed the Basic Phase requirements and are conducting maritime operations.

Curtis Wilbur is forward-deployed to the U.S. 7th Fleet area of operations in support of security and stability in the Indo-Pacific region.