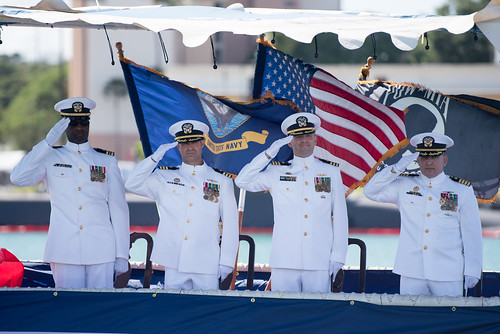 "The Columbia is the Battle E boat for Squadron Seven, that means they were the best submarine out of the 10 that were in the squadron,” said Davis. “Squadron Seven is unique in that it is the largest squadron of Los Angeles class submarines in the world. To stand out in such an outstanding crowd is an impressive achievement and a testament to the crew and their leader.”

Edgerton thanked his crew and credited them for the ship's success during his tenure.

"The days when we faced personnel challenges were the days I saw this crew take care of each other and provide support to their shipmates," said Edgerton. "Those were the days we learned humility and we were better as individuals and as a team because of it.”

Edgerton ended his remarks by telling the crew he had every confidence that they would continue to be successful in the future.

"While I am happy today is a day to celebrate your successes and recognition of your talents, it is truly heartbreaking for me that today is my last day as a part of your incredible command,” said Edgerton. “I will always be incredibly proud to say that I served with you.”

During the ceremony, Davis presented Edgerton with a Meritorious Service Medal for outstanding meritorious service as commanding officer of Columbia.

Following his tour aboard Columbia, Edgerton will report to Commander, U.S. 7th Fleet in Yokosuka, Japan.

As Forrest assumed command of Columbia, he thanked Edgerton for turning over such a great warship and incredible crew.

"To the crew of the Columbia, you are the brightest this nation has to offer," said Forrest. "Recognize that you are the ones that bring the life into Columbia’s hull and make her the great warship she is today. I look forward to serving with all of you as we transition to the next phase of Columbia’s operations and further cement her incredible legacy."

Commissioned in 1995, Columbia was the last 688-class submarine to be built at Electric Boat Shipyard in Groton, Connecticut. Columbia is one of the most versatile weapons platforms ever placed in the world's oceans, capable of long-range Tomahawk strike operations, anti-submarine and surface shipping operations, surveillance and intelligence gathering, and special forces insertions.