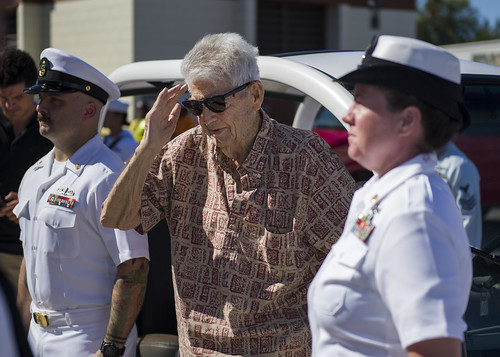 On June 19 Emory visited the Pearl Harbor waterfront to see one last time where his ship, USS Honolulu (CL 48), was berthed Dec. 7, 1941, the day Oahu was attacked.

"Chief Emory fought back that day, manning his machinegun, taking on enemy planes," said Fort. "He continued to fight on throughout the War in the Pacific. He and his buddies, with help from the home front, helped create an unprecedented era of peace, stability and prosperity. Victory at the end of World War II was Ray's finest hour."

Five hundred and twenty Sailors aboard USS O'Kane, berthed nearby, and Sailors from throughout the waterfront gave a tribute to the former Navy Chief, lining the rails of the ships, forming an honor cordon, saluting and shouting "hip, hip, hooray" to an American hero.

Fort added, "When the call came in 1941, Ray Emory and hundreds of thousands of other young Americans responded. Working with Allies and partners they fought to create a better world for our grandparents, parents, ourselves and our families. We do not take their sacrifice and commitment for granted. We remember."

Ray, a long-time resident of Hawaii, left for Boise Idaho in late June to be with family.

A memorial service will be announced by the family in coming weeks.