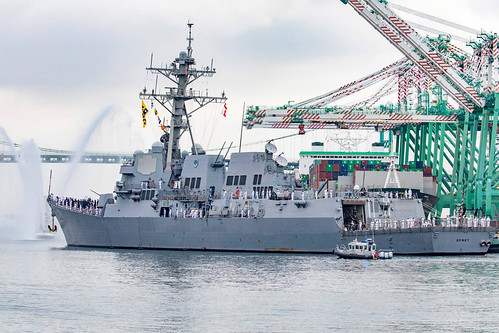 Fleet Week is a tradition in several cities across the U.S. that helps to raise public awareness of the role that sea services play in national prosperity and security as well as an opportunity to engage with local communities. LAFW is a multi-day celebration held at the Port of Los Angeles.

This year’s LAFW, will include more than 800 Sailors, Marines and Coast Guardsmen as well as Sailors from the Royal Canadian Navy. The service members are arriving on the guided-missile destroyer USS Dewey (DDG 105), the mine countermeasures ship USS Scout (MCM 8), the littoral combat ship USS Manchester (LCS 14), the Coast Guard cutter Alert (WMEC 630) and the Royal Canadian Navy frigate HMCS Ottawa (FFH 341).

“It’s great to welcome the Navy and our sea services in town to celebrate fleet week and the commitment our troops provide to keep our country free,” said Jonathan Williams, LAFW Foundation president.

The event is free to the public and offers a chance to learn more about Sailors, Marines and Coast Guardsmen and what they do. Opportunities include public ship tours, military displays and equipment demonstrations, a kids’ STEM Expo, aircraft flyovers, live entertainment, the 10th Annual Conquer the Bridge Race over the iconic Vincent Thomas Bridge, and the Galley Wars culinary competition between military branches. Another feature of Fleet Week this year is the Jack Ryan premiere, a red-carpet event that will be held on the Battleship Iowa.

Sailors, Marines and Coast Guardsmen participating in Los Angeles Fleet Week will have the opportunity to explore the community, attend performances and demonstrations, and to participate in community relations projects.

“We are each so proud to be here today,” said Rear Adm. Daniel Dwyer, commander, Carrier Strike Group 9. For some of our Sailors this their first time in Los Angeles, but for many of our Sailors, this is home. We all look forward to spending more time with you in your community this week. It is incredibly important for our Sailors to know they are supported.” 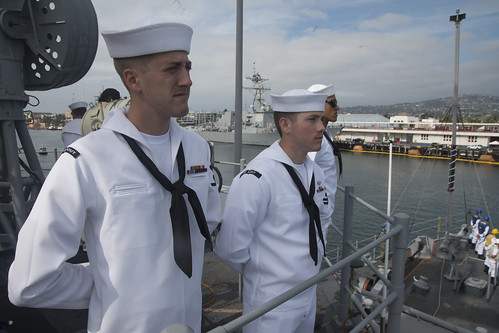 Sailors man the rails aboard USS Scout (MCM 8) as the mine countermeasures ships pulls into the Port of Los Angeles. (U.S. Navy/MC2 Eric Zeak)