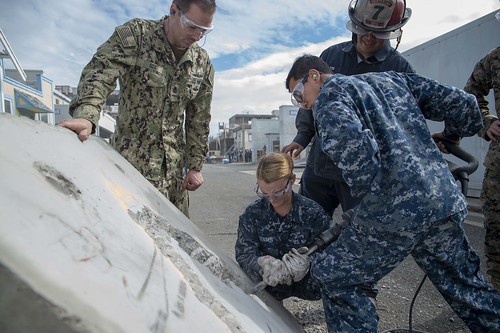 SAN FRANCISCO - San Francisco Fleet Week is famous for the Blue Angels air shows, the parade of ships, large crowds and service members walking around in their uniforms. One part of fleet week that is not widely known is the Defense Support of Civilian Authorities (DSCA) exercise held annually to train government agencies to work together to respond in the event of a natural disaster.

Training and preparing for the unexpected is the best form of readiness and the San Francisco Center for Humanitarian Assistance teamed up with the San Francisco Department of Public Health, U.S. Coast Guard, Navy and Marine Corps to host the 8th annual DSCA exercise Oct 1-3.

Nearly three decades ago on Oct. 17, 1989, a 6.9 magnitude earthquake shook up the San Francisco Bay area, and in the span of 15 seconds took the lives of 67 people, injuring nearly 3,000 others, and causing more than $5 billion in structural damages.

The DSCA exercise is a controlled environment designed to train and familiarize military forces and local first responders with rapid response capabilities to support recovery efforts following both man-made and natural disasters, such as hurricanes, earthquakes and industrial accidents.

“The exercises provide us with the opportunity to practice our capabilities to ensure we can execute the exercises as they are written in the plan,” said Mary Ellen Carroll, executive director for San Francisco Department of Emergency Management.

By partnering with the Department of Defense and practicing simulated catastrophes, the City of San Francisco and surrounding areas are able to witness first-hand the convenience of having a mobile force ready to assist in any case.

“[LCUs have a] crew of about 12 to 13 highly-trained Sailors and they’re ready, willing and able to make a difference,” said Pringle. “Every time we do a fleet week, we get a little bit better because of lessons learned from the previous one.”

LCUs are heavy lift craft and have over twice the payload and six times the range of air cushion type landing craft.

In addition to preparing for natural disasters, for the seventh year in a row, San Francisco Fleet Week included medical training exercises known as the Peer-to-Peer Medical Exchange. The goal is to provide an opportunity for naval medical professionals and local first responders the opportunity to work together to tackle a simulated catastrophe.

“There are a number of forces that drive change in the military health system; one of those is the requirement to adapt and evolve to new missions and to support new environments,” said Capt. Konrad Davis, director of Navy Telecritical Care. “Telemedicine is a tool that can help bridge the gap when you have critical and time-sensitive patients in need.”

The scenario introduced cutting edge technology for the first time to a DSCA exercise in San Francisco – augmented reality glasses, which allowed wearers to see the medical professional who remotely assisted first responders in real time.

“I was excited when I found out my unit was selected to work with Navy medical professionals to learn how to use the augmented reality visors during the telemedicine training exercise,” said Damon Victor, a paramedic with the San Francisco Fire Department. “These visors allow emergency responders to be able to talk to a doctor hundreds of miles away while we are out in the field. It’s very impressive to think of how this technology could impact field trauma care in the future.”

Natural disasters or mass casualty incidents call for an “all-hands on deck” environment and the expected response is the successful partnership between local, state and federal government, as well as civilian partners and local medical resources.

“Virtual help and medicine can help bring [time sensitive patients] the support and instead of the typical paradigm where if you are injured you go to the facility and to the hospital, we are trying to flip that on its head and reverse that,” said Davis. “We’re trying to embrace tools, technology, processes and partnerships that projects specialist expertise to the patient in need.”

Hinting at more to come in future iterations of DSCA exercises, Rear Adm. Paul D. Pearigen, commander of Navy Medicine West, lauded the accomplishments of what the Navy could bring to the table in the event of a major catastrophe.

“I will say it’s really just a glimpse of the many innovative efforts and emerging technologies that are being embraced by your military medical system that can also benefit the civilian system and really vice versa,” said Pearigen. “Our people have always been our greatest advantage and building a talented highly-trained fleet is foundational to achieving our mission.” 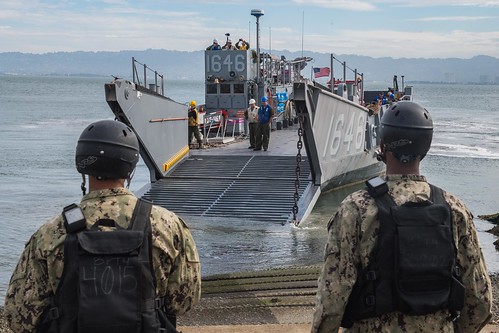 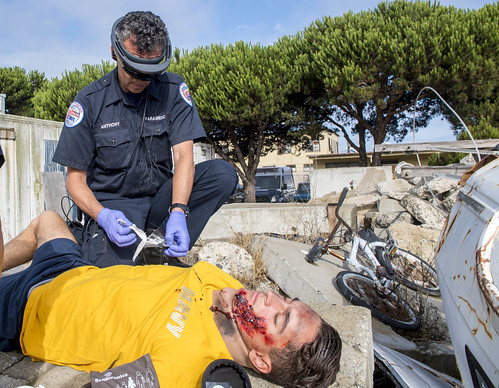