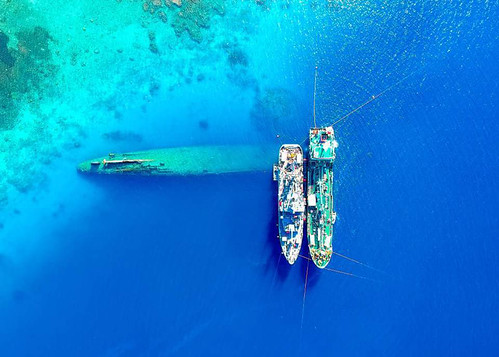 In collaboration with the government of the Republic of the Marshall Islands and U.S. Army Garrison Kwajalein Atoll (USAG-KA), the safe extraction of an estimated 250,000 gallons of fuel oil from Prinz Eugen began Sept. 1 and involved nearly two dozen divers along with support from commercial tanker Humber for transport of the removed fuel oil.

“There are no longer active leaks with 97 percent of the oil having been removed. The remaining oil is enclosed in a few internal tanks without leakage and encased by layered protection,” said Lt. Cmdr. Tim Emge, officer-in-charge of salvage operations. “Of the 173 total oil tanks, the 159 external tanks have been pumped of all appreciable amount of oil or were found empty.”

The Prinz Eugen was used in combat during World War II, and in May 1945 upon the conclusion of the war, it was surrendered to the British and transferred to the U.S. Navy for use in Operation Crossroads nuclear tests. After surviving two tests and subsequent towage to Kwajalein Atoll, the vessel began to take on water due to sea valve and rudder damage and ran aground settling in a capsized position off the coast of Enubuj Island.

As part of the 1986 Compact of Free Association between the U.S. and the Republic of the Marshall Islands the U.S. transferred the Prinz Eugen title to the RMI. Beginning in 2010, RMI requested the U.S. provide technical and financial support for Prinz Eugen fuel off-load.

In December 2016 U.S. Indo-Pacific Command worked with U.S. Navy Supervisor of Salvage and Diving to evaluate the current status of the Prinz Eugen and plan for a way ahead once funding became available. Following the 2018 National Defense Authorization Act, which authorized expenditure of Army funds to off-load oil from the Prinz Eugen, Karen Brevard Stewart, U.S. ambassador to the Marshall Islands, and State Department staff played a major role in getting the diplomatic work accomplished in time to meet the short deadlines set under the act. Work began in February 2018 to plan for and execute the removal of the fuel oil.

“Our team's hard work over the last two years preparing for this project and assembling the right combination of equipment and technical expertise enabled our success in this very important mission to protect the pristine waters of Kwajalein Atoll from the risk of a catastrophic oil release,” said Stephanie Bocek, project manager at the Supervisor of Salvage and Diving.

The operation, having preceded with surveys of the wreck, consisted of four stages: anchoring and mooring operations, fuel extraction, fuel transfer and dome closures of hull access.

After placing nine mooring anchors to hold both vessels over the wreck, the diving team began securely drilling holes on precise locations on top of each oil tank, a process called “hot tapping.”

“Hot tapping allows us to safely tie into the many tanks without leakage by creating a secure opening to place the valve, hot tap machine and pipe for pumping from the highest point on the tank,” said Emge. “We were able to successfully, and most importantly safely, conduct over a hundred hot taps throughout the operation.”

As follow-on oil sampling were conducted aboard Salvor, the removed fuel oil was pumped aboard Humber for transport and refinement in future use.

“Everything went very well, and I am very happy to have been part of this experience,” said Capt. Allan Rudy, master of Humber. “This was a new experience for me and the multinational crew, and we look forward to working together again in the future.”

After the application of double barrier protection on the hull of the vessel to ensure no potential leakage, the diving team conducted several community relations activities including a team-building run and beach cleanup on Enubuj Islands and a show-and-tell demonstration at the Kwajalein Atoll High School.

“The team worked tirelessly, and I am proud to have been part of this amazing experience as we were able to see history first-hand and connect with the local communities,” said Emge. “We remain motivated and look forward to exercises and operations with partner nations across the region in the near future.”

The U.S. Navy and U.S. Army continue to work with local populations across Kwajalein Atoll, which is home to the radar, optics, telemetry and communications equipment for ballistic and missile interceptor testing and space operations support located at the Ronald Reagan Ballistic Missile Test Site on Kwajalein. The Reagan Test Site belongs to the U.S. Army Space and Missile Defense Command/Army Forces Strategic Command’s Technical Center.

The USASMDC/ARSTRAT commanding general, Lt. Gen. James H. Dickinson, was a strong advocate for the fuel oil removal, and a key player in securing the necessary funding to move forward once Congress directed it under the National Defense Authorization Act.

Along with aid provided through the Compact of Free Association, U.S. Navy Seabees from Naval Mobile Construction Battalion 1 Construction Civic Action Detail Marshall Islands are currently deployed throughout the Kwajalein Atoll to support projects that are critical to improving the quality of life for the Marshallese population including water catchment systems, school renovations and disaster contingency construction. 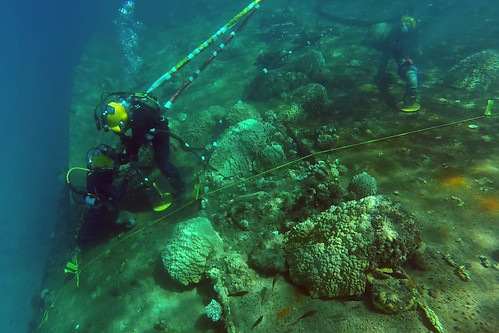 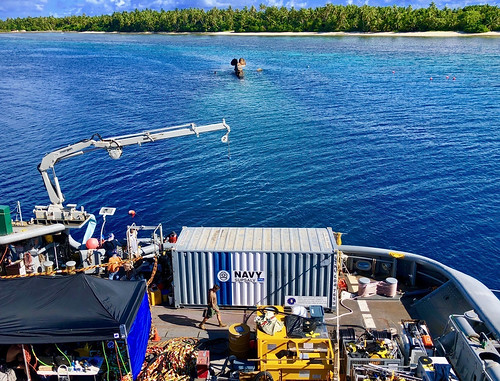