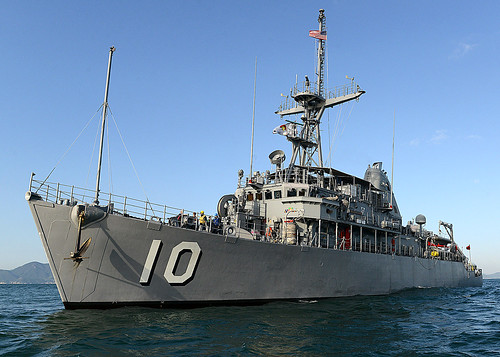 Dessources said he was not expecting to receive such recognition, but he was honored to have been selected.

"I was shocked at first," said Dessources. "My chain of command, for them to even submit me for this award, is a blessing. I'm very humbled. I always thank them every day because without them, I wouldn't be where I'm at."

Dessources said he tries to help his Sailors as much as his chain of command has helped him.

Dessources knows firsthand about taking advantage of education benefits through the Navy. He received his Bachelor of Liberal Arts from Excelsior College while serving.

"When the announcement was made regarding his selection as Mineman of the Year, I was very proud and content with the decision," said Torres. "MN1 Dessources earned the recognition through his hard work, dedication, and the results he and his team have achieved. I told him that this milestone was only the beginning, and I challenged him to exceed his professional and personal goals."

"My biggest goal right now is going officer," said Dessources. "I'm going to put in a package to be a surface warfare officer soon."

Dessources, a native of Bridgeport, Connecticut, joined the Navy 12 years ago as an undesignated seaman before striking mineman in 2009. He said he is honored to be a part of the mine warfare community.

"It's very humbling to be a part of all the greats that came before me and to carry on the torch," said Dessources. "Don't forget where you come from. I know where I come from, so I use that as motivation every day to keep pushing on and forward."

The mineman rating was created in 1943. The Association of Minemen was established in 1977 and is a nonprofit organization that aims to preserve the records and memories of the U.S. Navy mine warfare forces.