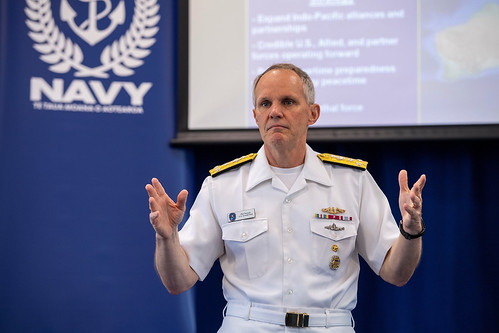 As well as meeting with his New Zealand counterparts he had the opportunity to get together with a variety of regional naval leaders to share viewpoints and experiences on a range of maritime security issues.

“The RNZN goes out of its way to make this a premier venue to discuss key naval issues in the region,” said Sawyer. “I appreciated the opportunity to meet with so many allied and partner leaders, and to reassure them that Seventh Fleet will continue to fly, sail and operate anywhere international law allows.”

The theme of New Zealand’s 2018 Fleet Warfare Forum is "Combined maritime operations within an Integrated Defence Force" and the forum heard from speakers from the United States, United Kingdom, Canada, France, Australia and New Zealand.

“This gathering allows an understanding of the differences but more importantly the similarities of how we operate as naval war fighters,” said Commodore Tony Millar, Royal New Zealand Navy. “Information sharing in situations like this enables New Zealand and our goal of achieving a connected, coordinated and agile military organization.”

The U.S. 7th Fleet was established March 15, 1943, when the Southwest Pacific Force was renamed. Today it is the largest forward-deployed U.S. fleet and its area of responsibility includes the Western Pacific and Indian Ocean.