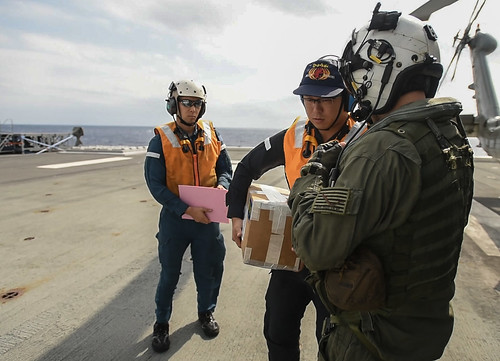 The Acquisition and Cross Servicing Agreement (ACSA) is a bilateral agreement for the exchange of logistics support, supplies and services during exercises, training or emergency situations. ACSA provides legal authority allowing the U.S. to buy, sell, give and loan support to other countries.

“Exercises like Keen Sword 19 and specific events, such as the ACSA logistics exchange, enables the continued bilateral partnerships and a united resolve that facilitates both security and cooperation in the 7th Fleet area of operations,” said Capt. Jerry Brown, the Task Force 70 assistant chief of staff for logistics and readiness.

Naval Aircrewman (Helicopter) 1st Class Ryan Quinn, a Sailor who has worked in the 7th Fleet area of operations for the past three years and the aircrewman who delivered the package to Huyuga, said the interaction between the two maritime forces was very friendly, receptive and well-coordinated.

“Every time I’ve worked with the JMSDF it has increased our ability to work together cohesively during training evolutions like today and prepared us to operate in the event of an actual crisis,” Quinn said.

Keen Sword 19 is the latest in a series of joint/bilateral field training exercises since 1986 designed to increase combat readiness and interoperability of U.S. forces and the JSDF. Two Royal Canadian Navy ships will participate in the maritime portion of the exercise for the first time.

The Ronald Reagan Strike Group is forward-deployed to the U.S. 7th Fleet area of operations in support of security and stability in the Indo-Pacific region.