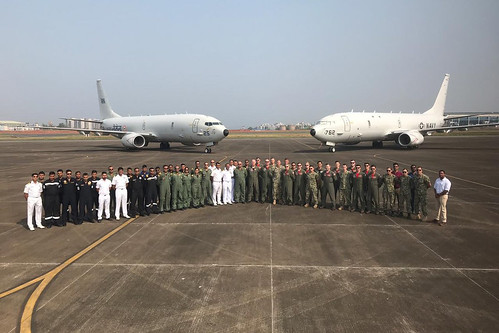 Purchased from the United States, the Indian Navy P-8I maritime patrol aircraft has been in service since 2013 and shares many similarities with the United States P-8A. As the first U.S. Navy maritime patrol squadron to transition the P-8A, VP-16 has substantial experience with, and knowledge about the platform, to share with their Indian counterparts.

Cmdr. Troy T. Tartaglia, VP-16’s commanding officer, praised the crews from both countries. “While our systems and training may differ, our missions remain the same," he said. "The cross-training and cooperation afforded by this exchange allowed us to refine P-8 ASW capabilities, directly supporting our shared mission set.”

The exchange included a SMEE flight where aircraft from both navies practiced operating in the same location, simultaneously tracking an Indian Navy submarine. Additionally, the two squadrons came together during multiple briefings to discuss coordination between the P-8s when operating together, to include standardizing altitude deconfliction, aircraft safety, tactical communication, and tactical employment of the P-8I and P-8A aircraft.

Naval Aircrewman (Operator) 2nd Class Crouch, described the exercise as “...a uniquely rewarding experience to work with the Indian Navy. Sharing our different perspectives allowed us to better accomplish our missions while fostering relationships.”