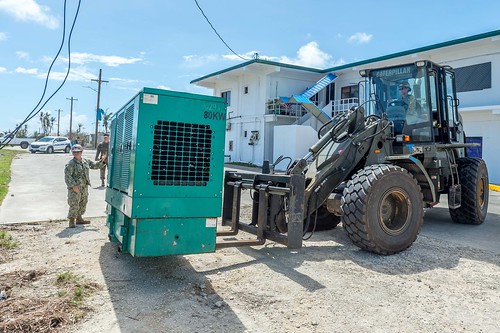 Taking shelter at the international airport, Marines with the 31st MEU arrived to lead Defense Support of Civil Authorities efforts to aid local leadership and the U.S. Federal Emergency Management Agency. Before stepping off, the units’ leaders met with local officials and FEMA representatives to gauge storm damage and response approaches.

The 31st MEU trains year-round to respond to crises across the vast Indo-Pacific region, including the Commonwealth of the Northern Mariana Islands, to which Tinian belongs.

“The 31st MEU is honored to help the great Americans of Tinian. We are teamed up with local officials and supporting FEMA to prevent a wider humanitarian disaster,” said Col. Robert “Bams” Brodie, 31st MEU commander. “The 31st MEU is the premiere crisis response force in the Indo-Pacific and our Combat Logistics Battalion, led by Lt. Col. Chris Johnson, is the unit of choice for DSCA operations. I am exceptionally proud of his leadership and amazed by the tremendous performance of his Marines and Sailors.”

Super Typhoon Yutu made a direct hit on the tiny U.S. territory Oct. 25 – the storm packed sustained winds in excess of 170 MPH, leaving the approximately 2,000 residents of the island without power and running water, and leaving many roads and public facilities waterlogged and surrounded by downed trees. It is the strongest storm to ever hit a U.S. territory and the strongest storm to his U.S. soil in 2018.

“This storm is historic – it had devastating effects on this island – but the people of Tinian are resilient and we’re glad to lend a hand to help them get back on their feet,” said Brodie.

The Marines from the 31st MEU and CLB-31, along with the Seabees of NMCB-1, U.S. Coastguardsmen with U.S. Coast Guard Cutter Washington and the soldiers with the Army Corps of Engineers, are partnering with both local agencies and FEMA to conduct an assessment of critical shortfalls of material and supplies to determine the best way to support the people and local authorities on Tinian. 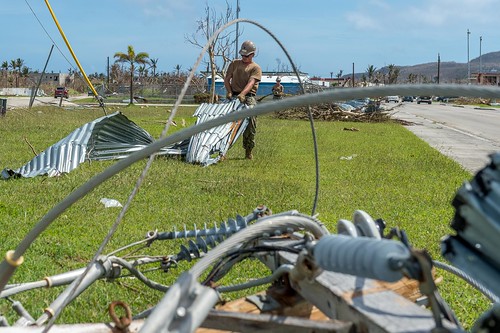