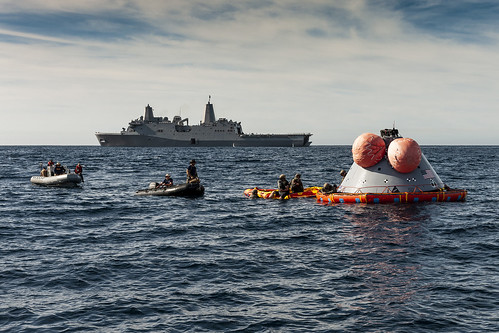 U.S. Navy divers prepare to attach the "front porch" to a test version of the Orion capsule as part of Underway Recovery Test 7. (NASA/Tony Gray)

The Underway Recovery Test-7 (URT-7) is part of a U.S. government interagency effort to safely retrieve the Orion crew module, which is capable of carrying humans into deep space.

This marks the first completion of a URT aboard John P. Murtha. NASA engineers worked alongside Sailors from the John P. Murtha, Special Boat Team 12, and Navy divers from Mobile Diving and Salvage Unit 11 and Explosive Ordnance Disposal Mobile Unit 3 to test recovery operations of the Orion test article. Tests were conducted throughout the day and night in varying sea states.

"John P. Murtha was tasked to assist NASA with their seventh Underway Recovery Test. Our crew executed of every assignment given to them flawlessly and their recovery-at-sea experience and dedication directly contributed to our overall mission success,” said Capt. Tony Roach, commanding officer USS John P. Murtha. "I am continually impressed and proud of the outstanding efforts of my crew members during each and every evolution."

San Antonio-class ships have distinctive capabilities essential to NASA’s mission. One of the more important capabilities is the ship’s ability to recover the test capsule using the ship's well deck, designed to launch and recover amphibious craft. John P. Murtha also has the ability to carry and deploy multiple small boats to assist in the recovery process of the capsule, and an advanced medical facility ideal for treating returning astronauts.

The tests allowed NASA and the Navy to continue to demonstrate and evaluate the recovery processes, procedures, hardware and personnel in a realistic open-ocean environment before conducting actual recovery operations.

“All test objectives were accomplished as planned,” said Melissa Jones, NASA Landing and Recovery director. “The success of this week would not have been possible without the positivity and experience of the John P. Murtha crew.”

John P. Murtha is homeported in San Diego and is part of U.S. 3rd Fleet.

Commander, U.S. Third Fleet leads naval forces in the Pacific and provides realistic, relevant training necessary for an effective global Navy. They coordinate with Commander, U.S. Seventh Fleet to plan and execute missions based on their complementary strengths to promote ongoing peace, security, and stability. 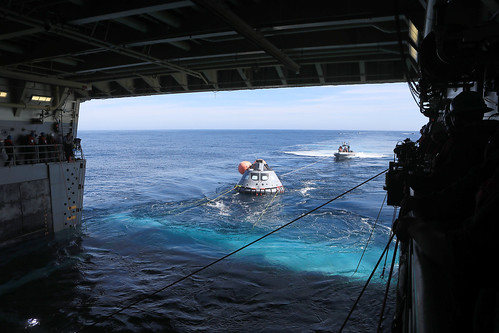 The test version of the Orion capsule is released from USS John P. Murtha (LPD 26) during recovery test. (NASA photo) 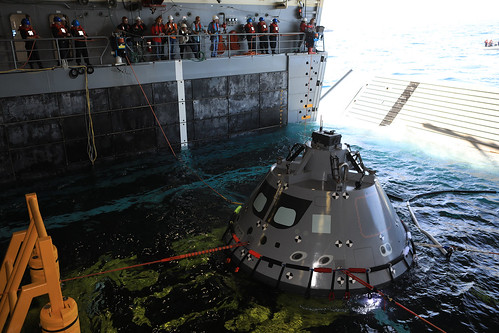