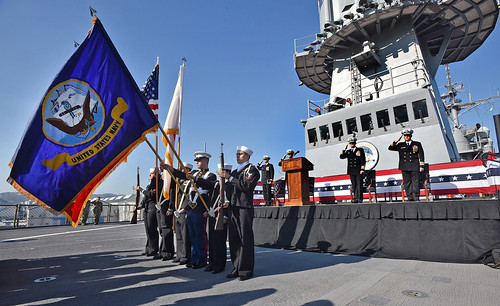 “For the last year and a half, I have had one of the best jobs in the Navy, in one of the best locations in the world, with my family alongside me,” Crozier said in his farewell remarks. “I couldn’t have asked for anything else… (this) will certainly be one of the highlights of my career.”

Anduze assumes command as the 30th commanding officer of Blue Ridge since the ship's commissioning in Nov. 14, 1970. Upon officially taking command, he highlighted the crew’s accomplishments over the past year as a sign of the quality of team he now leads.

“Over the past month I have observed this crew perform drill after drill, evolution after evolution, and I could not be more impressed with your performance. In less than a year you have transformed Blue Ridge from being torn apart in dry dock to re-establishing her as the Navy’s premier command and control platform,” he said. “I will strive every day to make sure we are ready to meet our mission and the Navy’s interests in the region.”

While in command, Crozier led Blue Ridge through the completion of a 28-month selected restricted availability, encompassing 141,804 man-hours of restoration and upgrades, followed by a successful return to sea earlier this year.

For that, Crozier said he had no one to thank more than the ship’s crew.

“I can personally attest that these accomplishments are just a very tip of a very deep iceberg that encompasses all the things a commanding officer deals with each day during his tour,” Thompson said during his keynote remarks. “(Capt. Crozier), you have managed the crew of Blue Ridge with great skill and you have left huge shoes for Eric (Anduze) to fill. Blue Ridge, I am happy to say that you are getting an amazing leader to carry the baton in Capt. Anduze.”

Anduze, a native of Manati, P.R., graduated from the United States Naval Academy in 1993 with a Bachelor of Science degree in Aerospace Engineering. He assumes command of Blue Ridge after serving as the executive officer aboard USS Carl Vinson (CVN 70).

Blue Ridge is the oldest operational ship in the Navy, and as the U.S. 7th Fleet command ship, is responsible for patrolling and fostering relationships within the Indo-Pacific region.