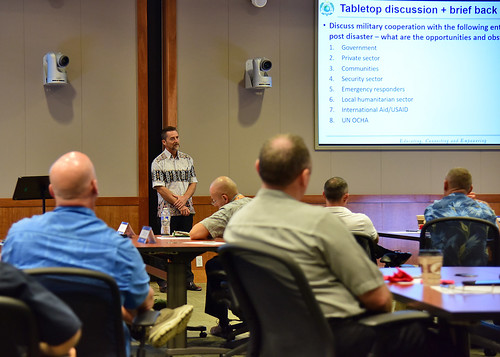 Throughout the week, participants engaged in discussions and training on critical international topics such as combined exercises, economics and trade, maritime security and law, humanitarian assistance and disaster relief, and interoperability to help them better support each other more effectively when facing regional problems together.

“We were able to discuss and collaborate on issues facing us all in the Indo Pacific region and hopefully by sharing we find common goals to work toward,” said U.S. Pacific Fleet Master Chief James Honea. “This greater understanding will help us better advise our commanders as well as better describe the theater to our Sailors.”

The theme for the symposium was “Leadership Through Common Goals.”

“We have to have a sharing of ideas so that we can see where our common goals are at and where our commonalities are. We don’t have everything exactly the same but when you mesh the things we’re trying to get after, the way we see the world, and the problems that we have, and as you overlay those things we can see several opportunities where we are the same,” said Honea.

Master Chief Petty Officer of the Japan Maritime Self Defense Force, Hideyuki Seki, a participant, expressed how he was impressed with the message and the facilitators, and added that he also intends to take the lessons he learned back to his Sailors. Seki said he recommends more opportunities such as this in the future.

“We have to work on strengthening our bonds and relationships with our partners and allies because we’re not going to face any adversary in the future alone. We depend on interoperability. We’re going to depend on our friends being able to operate alongside us with a common goal, to see to the end, whatever we need to do,” said Honea.

U.S. Pacific Fleet is the world’s largest fleet command, encompassing 100 million square miles, nearly half the Earth’s surface, from Antarctica to the Arctic circle and from the West Coast of the United States into the Indian Ocean. The U.S. Pacific Fleet consists of approximately 200 ships and submarines, nearly 1,200 aircraft, and more than 130,000 Sailors and civilians.