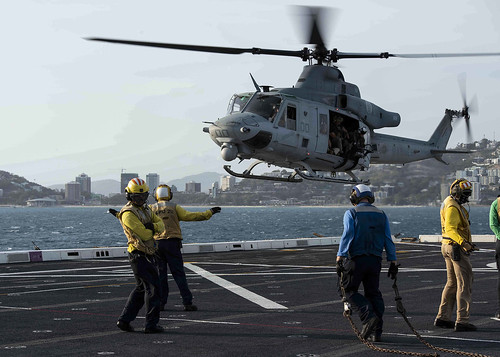 "The Navy-Marine Corps team on Green Bay has done a superb job here in Port Moresby," said Rear Adm. Brad Cooper, commander, Amphibious Force 7th Fleet. "They can take great pride in the vibrant support they gave to the security effort for the APEC summit."

"The blue-green team, along with the Royal Australian Navy, worked well together," said Lt. Robert Jameson, assistant air officer of Green Bay. "It's been inspiring to see the men and women from different services and countries come together and efficiently execute the mission."

"All the Sailors and Marines onboard were honored and proud to represent our country and support the Vice President during APEC," said Capt. Tom Shultz, commanding officer of Green Bay. "It was a unique mission that allowed us to work with new partners and learn new skills."

Green Bay is assigned to Commander Amphibious Squadron 11 forward deployed in Sasebo, Japan and is operating in the region to enhance interoperability with partners and serve as a ready-response force for any type of contingency. HMLS-469 is forward deployed to Okinawa, Japan.