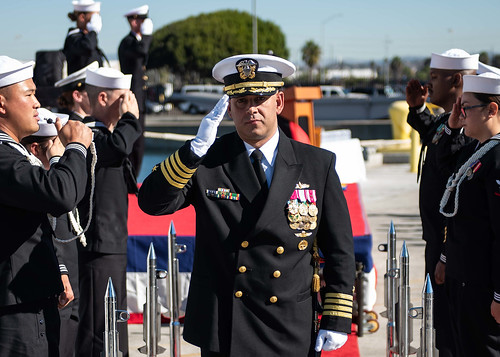 Tait, a native of Brighton, Michigan, and a 1992 graduate of the University of Michigan, assumed command in December 2016 and led Zumwalt through many of the ship's "firsts." During his nearly two-year tour, Tait led the Navy's newest and most advanced warship through numerous certifications, evaluations, and operational testing that brought a tremendous amount of knowledge to the Zumwalt-class program.

During the ceremony, Tait credited his crew, along with the Zumwalt program office, waterfront maintenance and training teams, warfighting development centers, and industry partners, for overcoming many challenges and finding solutions to increase their support to the fleet.

"The teamwork, resilience, technical excellence and extraordinary professionalism of this team are the foundation of everything we have accomplished,” said Tait of USS Zumwalt’s crew. “And Admiral Zumwalt’s spirit of innovation and meritocracy is alive and well here.”

The guest speaker for the change of command was Rear Adm. Dan Dwyer, commander, Carrier Strike Group (CSG) 9. Dwyer spoke of what Tait and Zumwalt’s crew accomplished over the last two years.

“Your crew is making history,” said Dwyer. “By working through unique, first-in-class challenges, you set the bar high, not only for the future Zumwalt-class destroyers, but for the next generation of surface combatants.”

Tait was awarded the Legion of Merit Medal during the ceremony. Tait will retire after more than 26 years of distinguished service.

“I endeavor to serve alongside you with patience, underscored with urgency of purpose derived from the clear acknowledgement that we hold the reins of a significant naval capability not witnessed before in the times of seafaring nations, and with that charge comes great responsibility to action," said Carlson. “There are no other navies that can do what we do, there are few other ships that can bring what we possess, and there are no other crews with whom I would rather be at sea doing our nation’s business."

Zumwalt is a guided missile destroyer of the United States Navy. She is the lead ship of the Zumwalt class and the first ship to be named for Admiral Elmo Zumwalt. 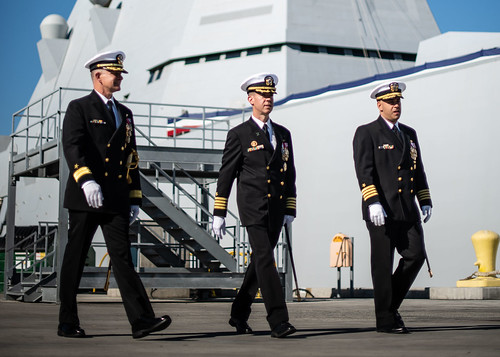 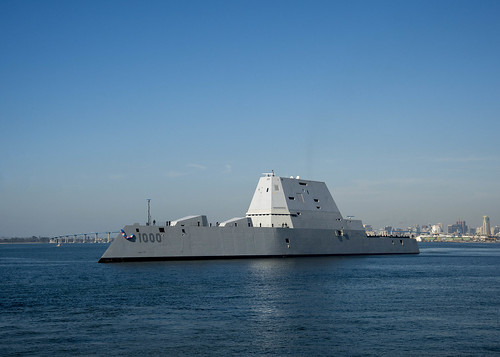 In thie file photo, USS Zumwalt (DDG 1000) steams through San Diego Bay in December 2016 after the final leg of a three-month journey to its new homeport after commissioning. (U.S. Navy/MC2 Zachary Bell)