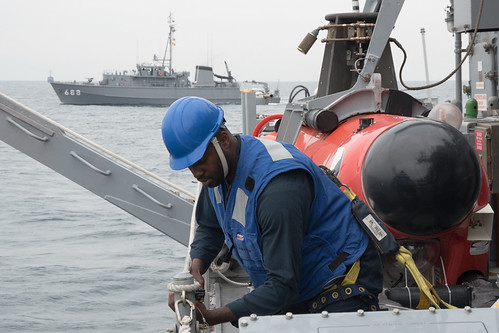 3JA is an annual exercise series that is designed to increase proficiency in mine countermeasure operations between the U.S. Navy, Japan Maritime Self-Defense Force and this year, for the first time, the Royal Australian Navy.

"These opportunities to train with our partners demonstrate the commitment we have to maintain peace and stability throughout the region,” said Lt. Cmdr. Fred Crayton, commanding officer of Chief.

During the exercise Sailors aboard Chief operated sonar to detect dummy mines placed throughout a location.

“You have to be super focused when operating the sonar,” said Mineman 3rd Class Adrian Ortega, a sonar operator. “Exercises like this help us stay ready and sharpen our capabilities.”

The exercise culminated in a combined phase in which Chief and JMSDF ships coordinated to clear a route for ships through a simulated minefield in one of the designated exercise areas.

“Each year 3JA gets better because we are able to bring forth valuable lessons learned and develop relevant mine warfare scenarios," said Crayton.

This year, 3JA was also used as an opportunity to enhance amphibious operations during mine warfare.

Chief is part of Mine Countermeasures Squadron 7, which serves as a ready response force for mine warfare operations throughout the Indo-Pacific region.