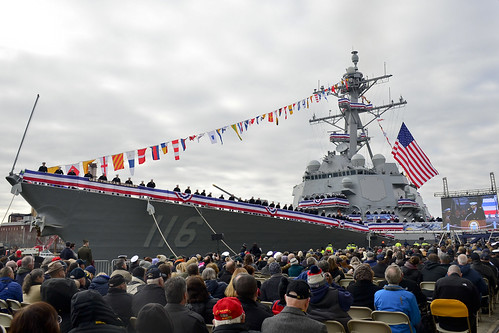 Capt. Hudner, a native of Fall River, Massachusetts, received the Medal of Honor for his heroic actions during the Battle of the Chosin Reservoir in 1950. Hudner crash landed his plane in a selfless effort to save the life of his wingman and friend, Ensign Jesse Brown, the Navy’s first African American aircraft carrier qualified naval aviator.

Among the distinguished guests and speakers at the commissioning, Thomas Hudner III, son of Capt. Hudner, gave a speech about his father’s life and legacy. Watch the ceremony.

“While many would say that my father’s actions were an extraordinary act, my father never thought of himself or that action as extraordinary,” said Hudner. “To the contrary, when he was asked through the years why he did what he did, he responded simply that it was the right thing to do and if he hadn’t acted, someone else would have. Throughout military history there have been countless acts of unselfish heroism, in fact the history of the United States has been built upon these acts many of which went unseen and without recognition. However, it was Capt. Hudner’s unselfish act in the service of his country, the United States Navy, and his friend and squadron mate that lives in the spirit of this ship.”

“Simply put, life was never about Tom Hudner,” said Baker. “He was the consummate team player. The only way a person would know anything about what took place on that mountain top during the Korean War would have been to hear from someone else or to have read about it because he never talked about that day. It is my fervent hope that this ship is imbued with the humility, selflessness, patriotism, the commitment to one another, the kindness and decency that transcends our differences that made Tom so special.”

The ship’s sponsors, Mrs. Georgea Hudner, wife of Capt. Hudner, and Mrs. Barbara Miller, former Co-Chair of the Flag Officer Spouse Training, gave the traditional order to “Man this ship and bring her to life,” signaling the Sailors to embark and officially begin service as a U.S. Navy ship.

For the ship’s crew, the day was the culmination of a few years of work to get USS Thomas Hudner prepared for commissioning. The day was a special opportunity to bring the ship to life in Boston, where the legacies of great ships and great people are kept and revered.

In fall of 2015, the keel of Thomas Hudner was laid down. The ship was christened on April 1, 2017 during a snowy ceremony at the BIW Shipyard in Bath, Maine and launched several weeks later on April 23.

Next, the ship will make her way to homeport in Mayport, Florida.

Arleigh Burke (DDG 51 class) class destroyers are highly-capable, multi-mission ships that conduct a variety of operations, from peacetime presence to national security. These DDGs provide a wide range of warfighting capabilities in multi-threat air, surface, and subsurface environments. The ship's Integrated Air and Missile Defense radar will provide increased computing power and radar upgrades that improve detection and reaction capabilities against modern air warfare threats, as well as ballistic missile defense. The Aegis Combat System will enable the ship to link radars with other ships and aircraft to provide a composite picture of the battle space, and effectively increase the theater space. New ships in this class, such as Thomas Hudner, have anti-ballistic missile capabilities as well. The DDG’s all-steel construction provides a survivable platform.