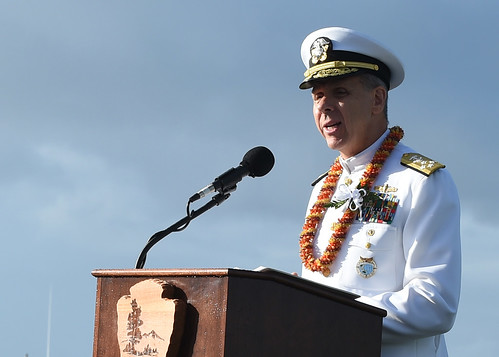 PEARL HARBOR - Early Friday morning, as rain fell softly across the island, a crowd of approximately 2,000 people were focused on one man -- Mr. Everett Hyland. Seventy-seven years ago, Hyland was on the deck of the USS Pennsylvania when it took a direct hit from a 500-pound bomb launched by Imperial Japanese forces. The bomb hit so close to where he was standing, it knocked him into the air. In the end, he sustained multiple wounds and severe burns, but escaped with his life. He was the only survivor on board. On Friday, the Arleigh Burke-Class guided missile destroyer USS Michael P. Murphy (DDG 112), passed through Pearl Harbor, rendering honors to Hyland and the thousands of Service Members and civilians who were at Pearl Harbor on December 7, 1941.

The Pearl Harbor Remembrance Day 77th Anniversary Commemoration was held on the ceremonial lawn at the Pearl Harbor Visitor Center to remember the 2,390 American casualties from the attack on Pearl Harbor and reflect on the peace and prosperity forged by all who fought on.

The theme of this year’s event was “Forging the Future,” which derives from President Franklin D. Roosevelt’s State of the Union address in 1943.

“As long as our flag flies over this Capitol, Americans will honor the Soldiers, Sailors and Marines who fought our first battles of this war against overwhelming odds,” Roosevelt said. “Their unconquerable spirit will live forever.”

The ceremony began with a customary moment of silence at exactly 7:55 a.m. -- the time that the attack started in 1941. Following the national anthem, a Hawaiian blessing and passing honors, Superintendent of the World War II Valor in the Pacific National Monument Jacqueline Ashwell, expressed her compassion for the service members who were present 77 years ago.

“When I have the privilege of accompanying someone on their very first visit to Pearl Harbor, I ask them to stop for a moment and go back in time with me to imagine the harbor as it was that day,” Ashwell said. “Explosions, chaos, smoke, flame. Some of you don’t have to imagine. You witnessed it first-hand. We are truly blessed to have you here with us today, to help us remember.”

Adm. Phil Davidson was the keynote speaker of the ceremony. He said that since WWII, the U.S. has continued to play an active role in ensuring a free and open region.

“The United States continues to work alongside our allies and partners towards this shared vision,” Davidson said. “But, challenges remain. There are nations and forces in the region today opposed to the idea of a free and open region. We will remain opposed to those who desire to lead a region who is closed and authoritarian. We cannot fail and we will not fail.”

Following the Admiral’s speech, active duty service members and national park service rangers presented wreaths to honor the Territory of Hawaii, Army, Navy, Marine Corps, Air Force and Coast Guard. These wreaths are an expression of gratitude and a symbol of unending appreciation of service and sacrifice.

Rear Adm. Brian Fort, commander, Navy Region Hawaii and Naval Surface Group Middle Pacific, reminded the crowd that in just under 2 years, we will commemorate the 75th anniversary of the end of World War II. The lives lost here at Pearl Harbor and throughout all of World War II will always be remembered; and that memory will continue to forge a generation of peace, partnerships, and prosperity for many generations. 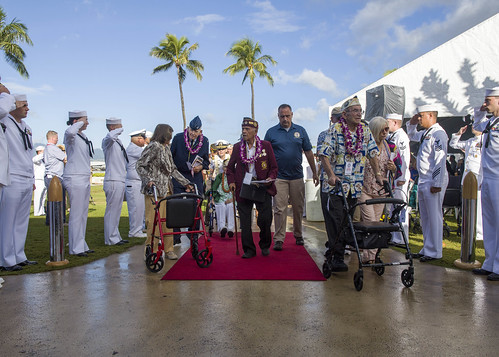 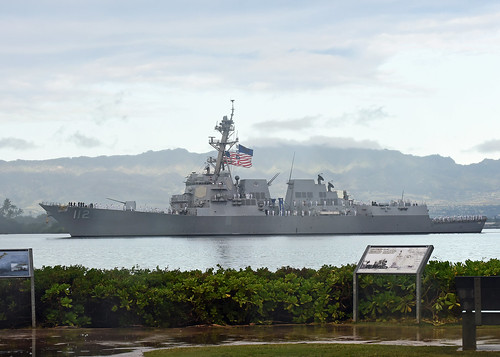