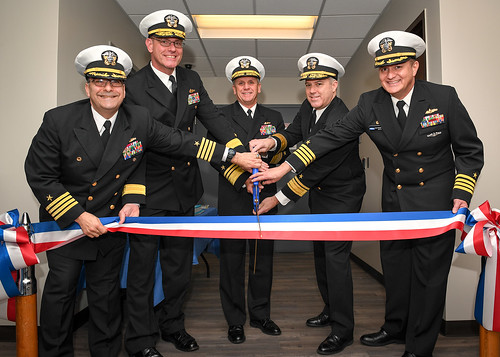 SAN DIEGO - Emerging threats and advances in integrated air and missile defense (IAMD) technology require a new approach to the development of warfighting expertise. Shipboard operators and tacticians must be properly trained to maximize the effectiveness of combat systems against emerging adversary technologies.

“This trainer allows us to continue to create a culture of excellence within the Surface Force,” said Brown. “For example, CIAT allows Warfare Tactics Instructors (WTIs) to propose new tactics, techniques, and procedures (TTPs), run them, get them right, then get them out to the fleet. In turns, ships can train on the TTPs to build lethality, warfighting and tactical proficiency.”

CIAT is a state-of-the-art facility where instructors train shipboard operators and tacticians in a controlled environment without being underway or even on the ship. The trainer is comprised of a mock combat information center, sonar room, control room and debrief room, all designed to maximize instructor observation and grow combat effectiveness. By taking the Sailors off the ship and bringing them to the shore-based trainer, it allows the students to spend a week dedicated to and focused on learning high-end warfighting, away from the distractions that can come with a ship’s daily schedule.

“Sailors gain the experience of using tactically coded equipment, high fidelity simulation tools, and a uniquely integrated debrief capability; all of which are non-existent in shipboard training systems,” said Lt. Cmdr. Reisheid Dixon, the officer in charge of Center for Surface Combat Systems (CSCS), San Diego. “I can create a scenario anywhere in the world and that operations/combat systems team can fight through tactical scenarios just like they would encounter as if they were on deployment. We have the ability to replicate atmospheric conditions, various threats, potential enemy actions and all other variables that may impact a weapon engagement’s possible outcome.”

One major benefit of the trainer is that it enables ships to safely execute dangerous, complex scenarios that would otherwise incur unacceptable risk in a live training environment with live targets. The trainer also provides training at a lower cost compared to real-world, underway operations; it aligns with TTPs; and it doesn’t deviate from tactical system performance or threat characteristics that a Sailor would expect onboard their ship.

“How Sailors expect a particular system to react on the ship is exactly how the system will react in the simulator. This will provide for greater watchstander proficiency, increase scenario realism and enhance the watchteam’s ability to plan, brief, execute and de-brief in a robust virtual environment. said Dixon. “Current shipboard training systems are limited in capacity to train to all required combat system capabilities.”

Capt. Peter Kim, the prospective commanding officer for USS Chosin (CG 65), toured CIAT a week prior to opening to see all the capabilities it has to offer.

“The benefits of a high-end, multi-mission, shore-based CIAT trainer are enormous,” said Kim. “In the past, training opportunities ashore for ships in maintenance were very limited. Crews can now take advantage of this facility any time to train, qualify, and maintain proficiency.”

CIAT also provides an individual who is training in a team environment with an integrated debrief capability. During training, the audio of the instructor and watch-stander is recorded for after-action reporting and instructor analysis.

The new capacity and capability provided by the CIAT provides a close-proximity, shore based venue for Naval Surface and Mine Warfare Development Center's (SMWDC) warfare tactics instructors to execute and validate existing and developmental TTP. It also provides the WTI cadre additional reps-and-sets on the weapons system to sharpen the Fleet's warfighting edge in a realistic, simulated training environment, which is also diffused throughout the Fleet resulting from WTI planning and execution of advanced tactical training exercises, doctrine and TTP development, and operational support.

One such WTI who had the opportunity to experience CIAT is Lt. Ben Olivas, an Integrated Air and Missile Defense WTI assigned to SMWDC Headquarters’ operations and training branch.

"CIAT is an extremely valuable training system. It was almost surreal to see how accurately the trainer mimics the combat system. I felt like I was on a real ship fighting the battle at sea. CIAT is undoubtedly one of the best training systems that the Surface Warfare community has invested in to advance our warfighting capabilities," said Olivas.

Following the opening of the San Diego location, CIAT developers plan to open an additional location in fall of 2019 at the CSCS detachment in Norfolk, along with adding two reconfigurable combat information center trainers at the Aegis Training and Readiness Center in Dahlgren, Virginia.

“This is the first of its kind, but not the last,” said Brown. “The quality and fidelity of this training is an unmatched capability for the Surface Force and it will serve to enhance warfighting skills and readiness across the waterfront in creating a culture of excellence; ultimately preparing our warfighters to own the fight.” 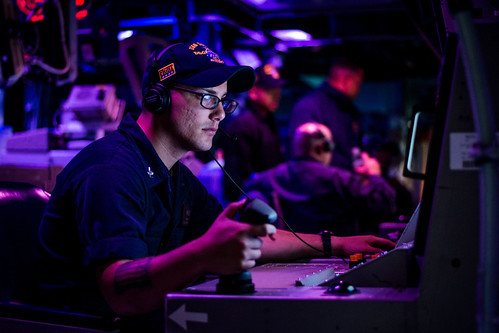