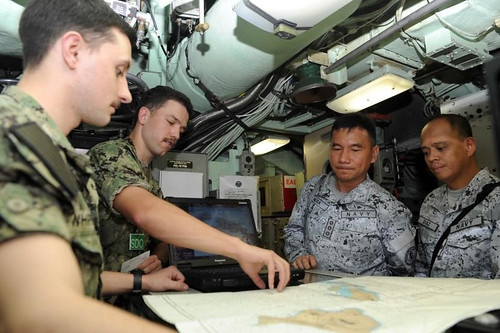 PUERTO PRINCESA, Philippines - The crews of USS Greeneville (SSN 772) and the submarine tender USS Emory S. Land (AS 39) welcomed Philippine officials aboard for a tour and opportunity to meet and have lunch with submarine force crew members, Dec. 10.

Cmdr. Terry A. Nemec, Greeneville’s commanding officer, hosted Armed Forces of the Philippines deputy commander of Naval Forces West, Capt. Carlos Sabarre, as well as Capt. Edwin Nera, head of the Philippine Navy Submarine Group for a tour of the Los Angeles-class fast attack submarine to highlight the importance of the U.S.-Philippine alliance to maintain peace and stability in the Indo-Pacific region.

“The U.S. and the Filipino navies work well together on a number of fronts and we’re pleased to have opportunities such as these, along with continued participation in bilateral and multilateral exercises,” Nemec said.

Emory S. Land also facilitated a tour of the ship for the distinguished guests and their staffs, and a meet and greet with some of the 139 active duty and civilian crewmembers of Filipino descent.

“The crews of the Greeneville and Land continue to impress our regional partners with their dedication and professionalism during recent visits,” said Capt. Michael D. Luckett, Land’s commanding officer. “I personally want to thank them and let their loved ones know they are working tirelessly to make a difference in a dynamic environment.”

The visitors were delighted to meet Filipino-American crew members who spoke to them in Tagalog about their shipboard jobs and quality of life, and any family members they had still living in the Philippines.

Among them was Senior Chief Electrician’s Mate Jeff Maigue – born and raised in Subic, Philippines – whose older brother is also a Chief Petty Officer in the U.S. Navy.

“Many of us joined the U.S. Navy to seek new and better opportunities, myself including, and one of the best opportunities we get is meeting new people everywhere we go,” Maigue said. “You realize there is more that unites people than divides them, and you'll find that with our regional allies in the Philippines.”

“There is something special about meeting others who share the same common language and also are sailors like me,” he said.

Emory S. Land is one of two forward-deployed submarine tenders and is on a scheduled deployment in the U.S. 7th Fleet area of operations to conduct maintenance and support of deployed U.S. naval force submarines and surface vessels in the Indo-Pacific region.

Greeneville measures more than 360 feet long and weighs more than 6,900 tons when submerged. It was christened Sept. 17, 1994 and commissioned on Feb. 16, 1996 at Naval Station Norfolk. The Greeneville arrived at its current homeport of Pearl Harbor, Hawaii in March 1997. 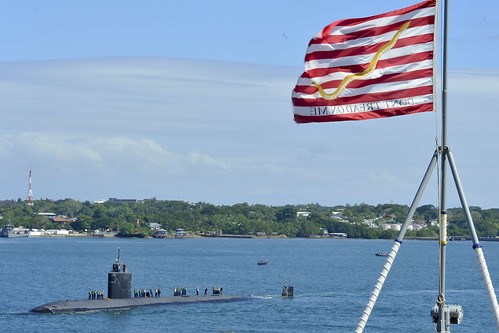 USS Greeneville (SSN 772) crosses the bow of USS Emory S. Land (AS 39) before mooring alongside the submarine tender for a port visit in Puerto Princesa, Dec. 9. (U.S. Navy/MC2 Daniel Willoughby) 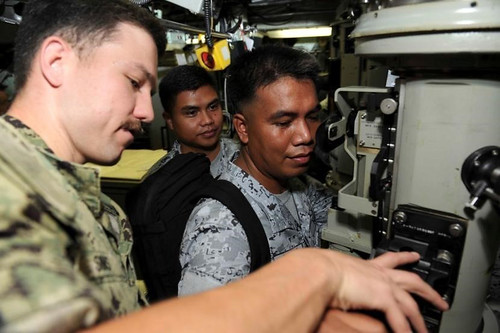 Lt. j.g. Aaron Sims shows members of the Philippine Navy how to operate a periscope during a tour of USS Greeneville (SSN 772). (U.S. Navy/MC2 Jordyn Diomede)