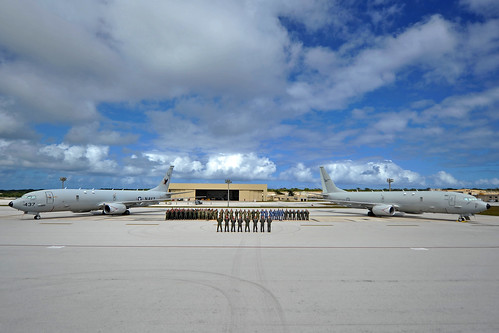 Service members from the U.S., Australia and the Republic of Korea pose in formation at the beginning of exercise Sea Dragon, Jan. 14. (U.S. Navy/MC1 Kevin A. Flinn)

ANDERSEN AIR FORCE BASE, Guam - Located at the southernmost point of the Northern Marianas Islands and the United States’ westernmost point, Guam is serving as the location of exercise Sea Dragon 2019, which kicked off Jan. 14.

Exercise Sea Dragon is an annual, multilateral exercise based out of Andersen Air Force Base with this year’s event running until Jan. 25. Participating U.S. units will include Patrol Squadron (VP) 47, VP-16, both operating under CTF-72, and Commander, Submarine Squadron (CSS) 15, operating under CTF-74. CTF-72 has taken lead and will oversee the exercise. Units from the Royal Australian Air Force (RAAF) will join U.S. units throughout the exercise.

“Being a multinational exercise, our goal is to work closely with our Pacific allies and to continue to foster relationships in the region,” said Lt. Cmdr. Korhan Orgun, VP-47’s 2019 exercise Sea Dragon officer in charge. “We'll do this through ASW events and learning to work together more efficiently. Additionally, this exercise is a chance for us to further hone our ASW skills and become even more proficient in one of our core missions.”

Four U.S. and one RAAF P-8A Poseidons will be conducting flight operations, with support from a joint Mobile Tactical Operations Center, during the exercise. Respectively, four U.S. aircrews and one RAAF aircrew will be sent with the aircraft. Exercise Sea Dragon stresses coordinated ASW prosecution against both simulated and live targets to include a Los Angeles-class attack submarine assigned to CSS-15.

“By also working with one of our submarines, it provides training for them and helps us prepare for any future engagements,” said Orgun. “It's an incredible opportunity for all involved.”

Exercise Sea Dragon illustrates that the U.S. and our partners stand ready to ensure the freedom of navigation and the free flow of commerce wherever international law allows. The United States stands firm with allies and looks forward to taking part in forging stronger relations, safeguarding safe and established maritime zones, and ensuring safe sea lanes.

“I have worked very closely with the RAAF P-8s before and even recently during the Rim of the Pacific Exercise,” said Orgun. “Our Australian allies have been very professional and skilled at what they do and I look forward to sharing our experiences and learning more from each other.”