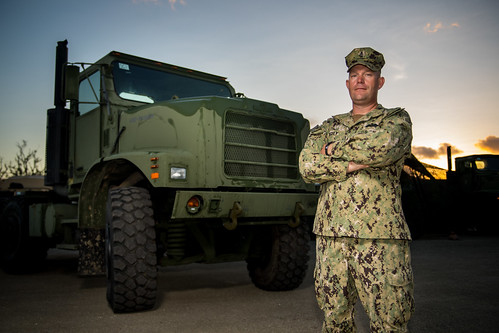 TINIAN, Northern Mariana Islands - A little more than 74 years ago, Seabees fought along side U.S. Marines in the battle for the Mariana Islands chain during WW II. Fast forward to today, Seabees’ are now fighting a different battle on the same island they liberated in August of 1944.

Super Typhoon Yutu, a category five cyclone, made landfall on the Northern Mariana Islands causing devastating damage, October 25, 2018. Soon after, U.S Navy Seabees were deployed to Rota and Tinian to aid in the immediate life-saving search and rescue operations.

A few months have passed, operations have moved to mitigating property damage and repairing roofs. Residents of Tinian continue to look forward to the Seabees’ help in getting back to a sense of normalcy like they had before Yutu struck.

For one Seabee, being here on Tinian in support of the recovery efforts has a special, personal significance.

“My grandfather participated in the invasion of Saipan and Tinian during World War II,” said, Chief Construction Mechanic Robin Nicely with Naval Mobile Construction Battalion (NMCB) 3. “Seabees run deep within my family; just like my grandfather who was a Seabee who hit the beaches of Tinian, I am proud to continue the Nicely legacy as a Seabee serving in Tinian today, this time in support of disaster relief.”

When Nicely found out that he was coming to Tinian in support of recovery efforts, he called his grandfather and relayed the news. Both were excited to share a place where there is a deep history of Seabee pride.

Nicely has only been on the island for a few days but has noticed how generous and kind the people of Tinian are.

“With Yutu hitting the island and causing so much devastation, the Seabees being here helps the community out with our ability to fix roofs and clean up debris and they are really appreciative of us being here, helping them get back to normal,” said Nicely.

While surveying the island, Nicely couldn’t help to think about his grandfather and how life was back when the island was a major U.S. military hub during WWII.

“It is amazing when I drive the roads [in Tinian] and think about the 40 thousand American troops on this island 70 plus years ago, and to look at the island and see the changes and try to image Broadway, the main street of the island, just packed with people,” said Nicely. “As I drive down the street, I look at the memorials that are out there and it is pretty amazing how we circle back in the history of this place.”

Nicely, and his fellow Seabees here with him are excited and eager to get to work helping Tinian recover from Super Typhoon Yutu.

“As the oncoming Seabee battalion, we are excited to come out here and help and take over for NMCB 1 and finish the work,” said Nicely. “Thank you to the people of Tinian for being so welcoming, nice and awesome to us.”

When Nicely returns home, he plans to share more of his experiences with his grandfather and talk about how Tinian was and how it is, but most importantly how they now share a common experience as Seabees serving on this special island of historic significance.