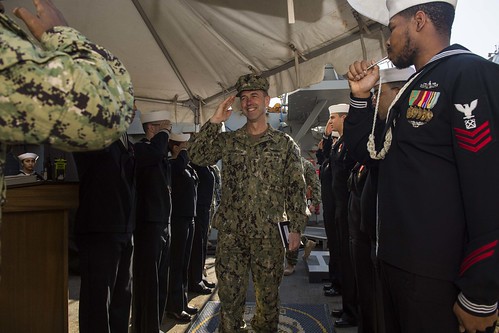 Sailors of various ratings and ranks sat down with the CNO, who spoke on topics such as current expectations and future goals for the region, all of which affect Sailors operationally in 7th Fleet.

“I first met the CNO when he came aboard the Antietam a few years back,” said Sonar Technician (Surface) 1st Class Darron Thomas, Jr. from Akron, Ohio. “But meeting him now I’m surprised how personable and honest he is when talking with the junior enlisted. I felt he really cared, and to see him this way made me feel better going into the fight knowing he is that kind of leader. His conviction is really appealing to me.”

Richardson went on to tour the Arleigh Burke-class guided-missile destroyer USS Benfold (DDG 65) and held an all-hands call with the crew.

"Everyone, myself included, is watching what 7th Fleet is accomplishing," said Richardson. "Each and every one of you are at the tip of the spear protecting our nation and our allies in an area of the world that demands much from you. I can't thank you enough for your dedication and service so that our friends and family can enjoy the freedoms and privileges back home."

Junior officers and chief petty officers (CPO) also met with the CNO at the base CPO Club for an all-hands call where he discussed the idea of “being biased to getting the job done.”

“We came here today to interact and understand [the CNO’s] goals,” said Chief Yeoman Corey Singleton from Allendale, S.C. “I love his communication flow, it’s awesome. He is very effective in delivering information that makes its way all the way down to the deck plates and it is very impactful.”

Following his visit to CFAY, Richardson will travel to Tokyo to meet with Government of Japan Prime Minister Shinzo Abe and Japanese Maritime Self-Defense Force (JMSDF) Chief of Maritime Staff Adm. Yutaka Murakawa for discussions on continued maritime cooperation as allied nations on the water front.