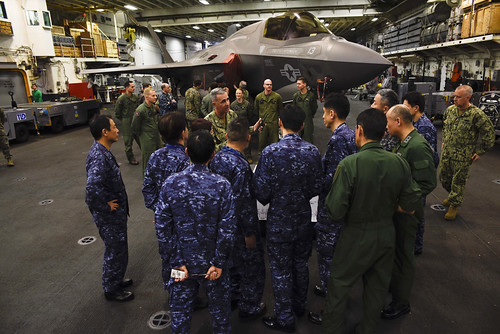 “It’s great getting out to sea with my counterpart, Vice Adm. Yamashita.” Sawyer said. “Our forces work together closely every day and I look forward to seeing that partnership expand with new capabilities, like F-35B.”

The Japan Self-Defense Force has been working with the U.S. Navy and Marine Corps to develop greater amphibious capabilities as part of the newly-established Japan Ground Self-Defense Force, Amphibious Rapid Deployment Brigade (ARDB).

“I am thankful again for the opportunity to observe USS Wasp and her equipment with the consideration of Vice Adm. Sawyer, C7F.” Yamashita said. “JMSDF and the 7th Fleet are always pursuing deepening joint [interactions] at all levels. Recently, we have received great support from the U.S. Navy and the U.S. Marine Corps for improving our amphibious operation capability. We continue to implement various missions and exercises with the 7th Fleet for the sake of peace, independence and stability of the region by making it the principle to ‘the strength, readiness’ and ‘always preparing ourselves as if we were on the battlefield.’”

Wasp, flagship of the Wasp ARG, with embarked 31st MEU, is operating in the Indo-Pacific region to enhance interoperability with partners and serve as a ready-response force for any type of contingency. 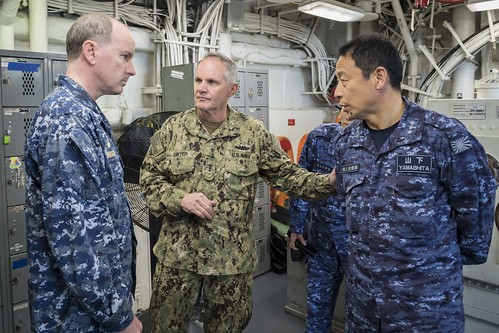 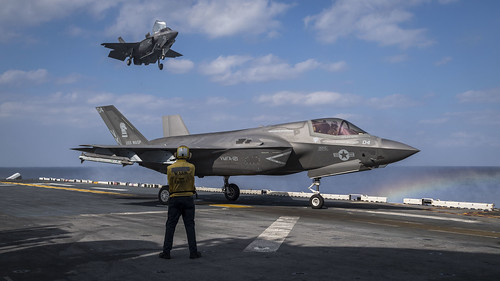 An F-35B Lightning II aircraft prepares to land behind another during flight operations in the Philippine Sea, Feb. 2. (U.S. Navy/MC2 Sarah Myers)