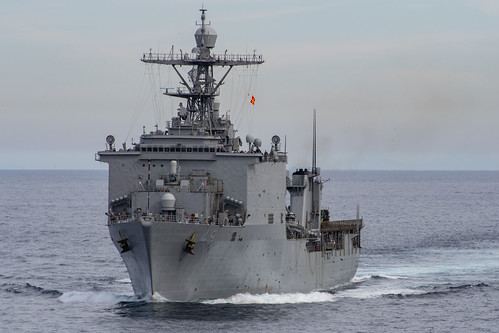 Three surface ships have satisfied certification requirements under these changes, which increases commanding officer’s (COs) discretionary crew training time. The changes also underscore the determined effort to foster a culture of excellence in the surface force.

USS Charleston (LCS 18) completed her New Construction Light Off Assessment (LOA) in three and a half days, half the time allotted for the visit. The ship accomplished more than 70% if her material checks in the two weeks leading up to the LOA, which greatly facilitated that early completion.

LOA is an assessment which ensures the ship is able to safely light-off and operate its engineering plant both in port and at sea. The assessment was performed by EAP/ATG SD as well.

Satisfactorily completing certification events early is a key focus area of the revised SFRTM, which was published on Nov. 1, 2018. It accomplishes two important goals. First, it puts a big “t” (Training) and little “a” (assessment) into Afloat Training Groups (ATG), ensuring that ship’s leadership focuses first on training Sailors. This underpins the Surface Force’s rededication to command at sea and an insistence that crews work hard to not just meet standards but strive for operational excellence.

Secondly, while meeting the same required standards, the SFTRM changes the delivery strategy of Basic Phase Training. ATG-led training and drills will first certify the ship’s watch teams. Once the crew’s watch teams have demonstrated proficiency, ATG will then focus on the ship’s training team certification. This crew-based training teams ensures that the ships are able to continuously train during the Optimized Fleet Response Plan (OFRP) cycle.

Importantly, ships that are able to demonstrate proficiency and meet standards during certification events will certify when they meet those standards. Under the previous approach, an unnecessarily artificial time-based, lock-step compliance method handcuffed crews both ready and capable of accelerated readiness certification. Ship COs who build a culture of excellence within their crews and earn certification earlier will get the remaining Basic Phase time back to further build upon their culture of excellence and warfighting ethos.

Vice Adm. Rich Brown, commander, Naval Surface Forces, emphasized this message to ship COs during his State of the Surface address at the 2019 Surface Navy Association (SNA) symposium.

“I am your biggest advocate with your operational chain of command for giving time back to you and the ship. We’ve set the conditions for our CO’s to be more confident in taking risks by restoring firebreaks between maintenance, training, and operations and we improved training and assessments. So, we need COs to seize the initiative, and to be confident, sensible risk-takers because winning in combat demands it,” said Brown.

Winning in this era of a Great Power Competition demands embracing the concept of mission command.

“I’ve said this many, many times: As the CO goes, so goes the ship. We’ve been making changes to the Surface Force for nearly a year now. 2018 was a year devoted to raising standards, improving training, tightening up qualifications, re-emphasizing certifications, and reasserting the primacy of command. 2018 was about being the best. It was a year of building readiness, but we don’t build readiness for readiness’ sake. We must turn that readiness into lethality. And we do that through an unrelenting pursuit of excellence over compliance,” said Brown.