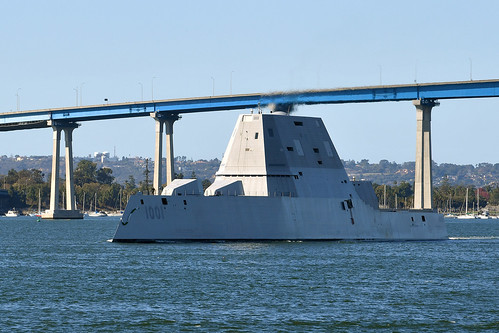 In this file photo, the future USS Michael Monsoor (DDG 1001) cruises under the Coronado Bridge as it arrives at its San Diego homeport for the first time, Dec. 7, 2018. (U.S. Navy/MC1 Jacob I. Allison)

“The most important task we charge our commissioning commanding officers with, is building and training the ship’s first crew. Captain Smith has done exactly that; where he is a shining example of servant leadership. He empowered his team to take ownership of every aspect of their pre-commissioning unit, which set a rock solid foundation for future Monsoor Sailors," said Galinis. “He was the right leader at the right time to command the USS Michael Monsoor.”

The ship honors Petty Officer 2nd Class Michael Monsoor, a Navy SEAL who was posthumously awarded the Medal of Honor for his heroic actions in Ramadi, Iraq, Sept. 29, 2006. Smith discussed how the crew strived to embody the legacy of the ship’s namesake during his tenure.

“Mike [Monsoor] demonstrated that with our families behind us, our friends beside us, and faith in the future, we can accomplish even the most difficult undertakings. These Sailors have proven that,” Smith said before turning over command.

Having served as Smith’s executive officer, Edwards assumed all duties and responsibilities after his official orders were read and thanked Smith.

“It is an absolute privilege and honor to assume command of such a motivated and capable crew that endeavors daily to serve in a manner which honors our namesake, Michael Monsoor,” said Edwards. “Under Capt. Smith's leadership, this crew has met every expectation with vigor and zeal and it is a testament to his leadership that we are a cohesive team with mission accomplishment as our cornerstone.”

USS Michael Monsoor was commissioned Jan. 26 at Naval Air Station North Island, California. The 16,000-ton ship is 610 feet in length, has a beam of 87 feet, and a navigational draft of 27 feet. It can sail at speeds of up to 30-plus knots.

Zumwalt-class destroyers are the most lethal and sophisticated destroyers ever built. They provide deterrence and forward presence by bridging today’s innovation with future technology. 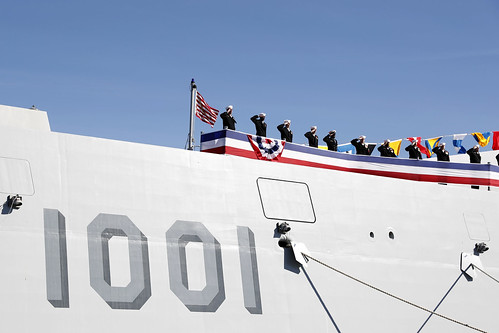 The crew of USS Michael Monsoor (DDG 1001) salute as the ship is brought to life during its commissioning ceremony. (U.S. Navy/MC1 Peter Burghart)