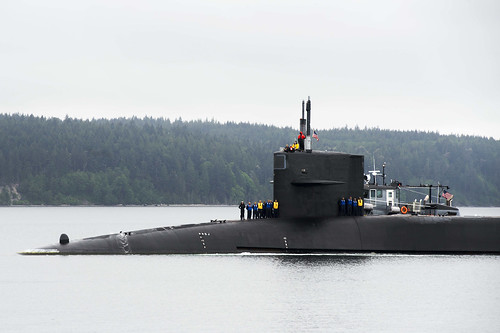 INDIAN ISLAND, Wash. - The Ohio-class guided-missile submarine USS Michigan (SSGN 727) returned home to the Pacific Northwest May 13, after being forward-deployed for 30-months in the Western Pacific.

Since its departure in December 2016, Michigan was forward-deployed to Guam, where it conducted surveillance, training and other critical missions in the 7th Fleet area of operations.

"Both Michigan Blue and Gold crews worked tirelessly together, and with our maintenance partners from Puget Sound Naval Shipyard and the Guam-based submarine tenders Frank Cable and Emory S. Land, to keep an aging ship ready to fight at the tip of the spear in the Western Pacific," said USS Michigan Blue's commanding officer Capt. Bradley Terry. "Keeping a submarine as complex as Michigan deployed for approximately 30-months is an extremely noteworthy accomplishment and demonstrates the remarkable skill, capability, and resiliency of our submarine Sailors and their families that support them."

Michigan also worked with partners from the Republic of Korea Navy (ROKN) in Busan to build and maintain maritime partnerships. The rotating crews swapped seven times throughout the deployment.

"We all have great reasons to be proud of the seven crews that have kept Michigan operationally deployed for nearly 30 months," said Capt. Christopher Kline, deputy commander, Submarine Squadron 19. "This ships tremendous operational capability has been exercised in countless ways by extraordinary Sailors and has contributed significantly to the security of the U.S. and our Pacific partners in ways that few know. We welcome the ship and her crew back home with the confidence that the team is ready for all challenges as the ship enters their maintenance period."

Both Michigan Gold and Blue crews received the 2018 Submarine Squadron 19 Battle Efficiency Award (Battle E) while forward deployed. The Battle "E" is an award of merit presented to the most proficient submarine crews in each squadron. This signifies Michigan's sustained superior technical performance and combat readiness throughout the year.

"Both crews excelled in all mission areas and gained invaluable forward-deployed operating experience in the dynamic 7th Fleet area of operation, as well as offering leadership tremendous operational flexibility due to the versatility and capability of the SSGN platform," said Terry. "However, as exciting as operating in the Western Pacific is, nothing beats returning home to the beautiful Pacific Northwest. Both crews will now be focused on getting Michigan ready for a scheduled maintenance and modernization period in Puget Sound Naval Shipyard."

Michigan's return to the Pacific Northwest makes this its forth deployment since its conversion from a Trident ballistic missile submarine (SSBN) in 2007.