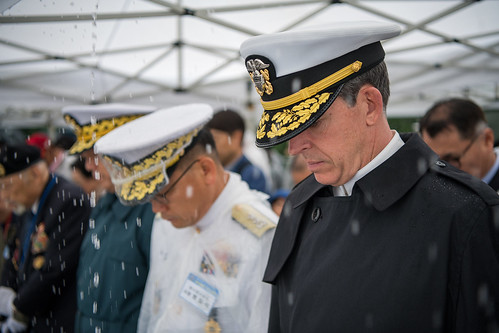 Rear Adm. "Buzz Donnelly bows his head for a moment of silence during a ceremony commemorating the 69th anniversary of the Battle of Daehan Strait, which marked the start of the Korean War. (U.S. Navy/MC2 William Carlisle)

BUSAN, Republic of Korea - U.S. Navy Sailors serving in Korea honored the 69th anniversary of the start of the Korean War by participating in multiple commemorations honoring those who sacrificed their lives to defend the Republic of Korea, June 25 and 26.

On the morning of June 25, Rear Adm. Michael “Buzz” Donnelly, commander, U.S. Naval Forces Korea (CNFK), placed a wreath at the United Nations Memorial Cemetery in Korea (UNMCK) to commemorate the sacrifices of the many nations’ forces who fought to defend Korea throughout the war. Donnelly attended on behalf of Gen. Robert. B. Abrams, commander, United Nations Command.

Donnelly said it is the commitment of the United Nations that continues to ensure that the sovereignty of the Republic of Korea is maintained to this day.

“The lives lost here, the men and women who lay in this ground, are our reminders of the terrible cost of war,” Donnelly said. “Today we remember that our dedication to this region is our promise to honor their memory by continuing to strive for peace and stability on the peninsula and around the world.”

Later that day, Cmdr. Jeremy Ewing, commander, Fleet Activities Chinhae (CFAC), threw out the first pitch at the NC Dinos baseball game with USFK and CFAC Sailors as well as Korean War veterans in attendance. Ewing said he was humbled to join the veterans of the Republic of Korea to commemorate the start of the Korean War.

“The Sailors assigned to Commander, Fleet Activities Chinhae, many of whom have joined me on the field today, are steadfast in their devotion to fight and defend Korea alongside our Korean allies," Ewing said. "We're honored to participate in this ceremony that celebrates the incredible contributions of our veterans who fought so valiantly to secure freedom and democracy in Korea 69 years ago."

The next day, Donnelly laid a wreath at Gungang Park in Busan to commemorate the Battle of Daehan Strait, the battle that marked the start of the war, at which a North Korean troop transport attempted to land near Busan before it was sunk by a South Korean patrol ship. 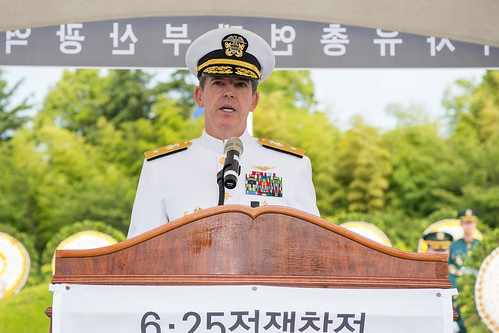 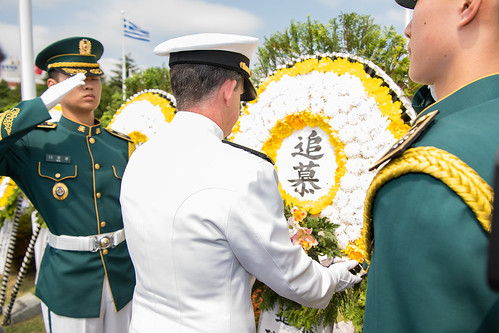