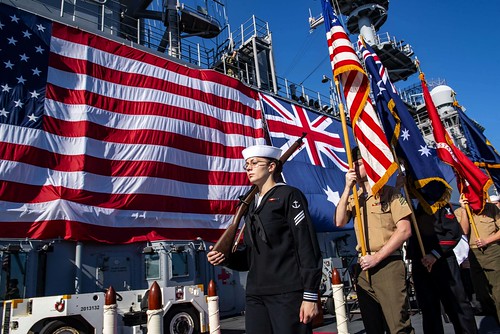 “Australia and the United States are Pacific nations who have served and fought alongside each other in both peace and war and share a steadfast commitment to the Indo-Pacific region,” said Kacher.

The eighth iteration of the exercise, and involving 36 ships and more than 25,000 Sailors, Marines, Soldiers, Airmen, and Coast Guardsmen, Talisman Sabre 2019 was designed to improve combined and integrated training between U.S. and Australian forces, focusing on combat training, readiness and interoperability through realistic, relevant training necessary to maintain regional security, peace, and stability.

“With every iteration, Talisman Sabre becomes more valuable, more realistic, more challenging and that makes all of us better,” said Kacher. “This year’s Talisman Sabre was the culmination of months of planning spent preparing a challenging scenario and examining how, working together, we would respond to a tough and well-equipped adversary.”

“Today marks the end of Talisman Sabre ’19, the eighth of the series, the most demanding, the most complex and largest of the series,” said Noble. “There are very few exercises of this size, scale and complexity where we operate in air, land, sea, cyber and space and we test the joint force, the combined nation forces.”

During the exercise, the Wasp ESG - comprised of Wasp, USS Green Bay (LPD 20), USS Ashland (LSD 48), USS McCampbell (DDG 85), and USCGC Stratton (WMSL 752) - had the opportunity to train with vessels from Australia, Canada, Japan, and New Zealand to focus on dynamic maneuvering schemes and elevated command and control. India and South Korea were present as observing nations. At the same time, Marines from the embarked 31st Marine Expeditionary Unit (MEU) conducted training and preparation culminating in a simulated joint amphibious assault, providing participants the experience of a beginning-to-end scenario.

“In addition to our Australian and US Forces, I express my heart felt appreciation to Japan, Canada, New Zealand, and the United Kingdom for sending their personnel to participate in this high end exercise. We also thank and acknowledge the many nations who sent observers as well,” said Kacher. “Our experience here highlights the importance of exercising our combat skills together, so we have a better appreciation of each other’s capabilities and how to combine into a lethal and cohesive force should we be called to do so.”

Noble added, “This is the first time the Australian helicopter land docks ships HMAS Adelaide and Canberra have operated together fully in a full tactical scenario doing amphibious landings as a combined force. It is the first time the U.S. Army, the U.S. Marine Corps, fired their high mobility artillery rocket system, known as HIMARS Live Fire, in Australia inside that combined setting.”

“I believe all of us are leaving this exercise smarter, better trained and more confident than when we started it,” said Kacher. “We also conclude this exercise, with an even better appreciation for Australian hospitality. For so many Americans, Australia is a dream destination to visit – not just for its beauty but its people – and I can promise you that our Sailors and Marines visiting for the first time won’t forget it.” 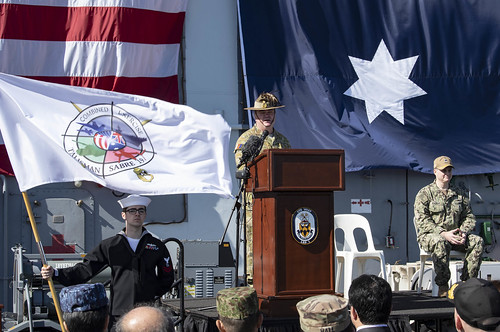