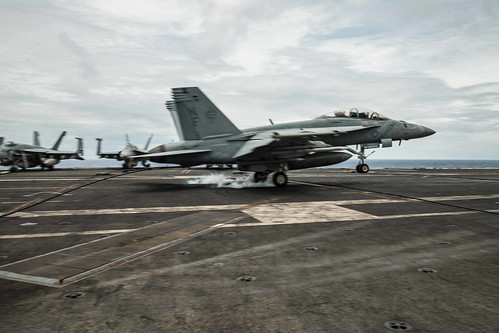 Cmdr. Harry Evans made the landing, or trap, in an F/A-18F Super Hornet.

“A trap is really the culmination of a flight — the controlled crash if you will,” said the Syracuse, New York native. “It’s a lot of people working together from the maintainers in my squadron, to the yellow shirts on the roof, to the grapes giving us gas, to the green shirts launching and recovering. It’s a huge team effort to get an airplane ready to go and come down for safe landing.”

Evans served as the weapons system officer during his landing. “I sit in the back seat of the F/A-18F. I control navigation, weapons systems, and communication. I’m basically another set of eyes and ears to back up the pilot and working our crew coordination to accomplish the mission.”

When asked what advice he would offer to other aviators, Evans recalled his first flight and trap. “It’s about persistence — you have to always work and master the basics in every single thing you do. In this business, you’re only as good as your last pass. Every time you’re flying you have to get better, learn every time and try not to make the same mistakes. There’s a lot of passion, time, attention-to-detail and concentration that goes into this.”

Evans said his 1,000th trap is a huge milestone not many aviators reach during their Naval career and attributed it to his Sailors and family.

“This is a testament to all my hard-working Sailors in 102. The amount of work it takes to maintain aircraft to get it into the air and safely back to support our mission and tasking is immense. We do a lot of things in a controlled and sequenced harmony to get it right. I have to thank my family because it’s a lot of time away from home doing this job. I’m thankful they support me to have this amazing opportunity every day.”

Evans briefly met with Toby Purisima, the Philippines’ assistant secretary of civil defense, and Maj. Gen. Erickson Gloria, deputy chief of staff of the Armed Forces of the Philippines, and was greeted with applause and congratulatory handshakes for his achievement.

Brig. Gen. Elpidio Talja, wing commander of the Philippines’ 520th Air Base Wing, witnessed the arrested landing on the flight deck while taking a tour aboard. “It was impressive to watch all the movement on the deck and to see expert pilots perform. It was a highlight of our tour here,” he said.

Ronald Reagan, the flagship of Carrier Strike Group 5, provides a combat-ready force that protects and defends the collective maritime interests of its allies and partners in the Indo-Pacific region. 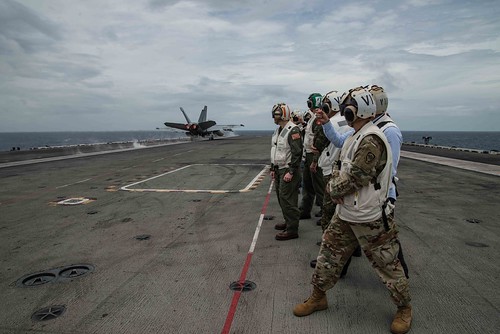