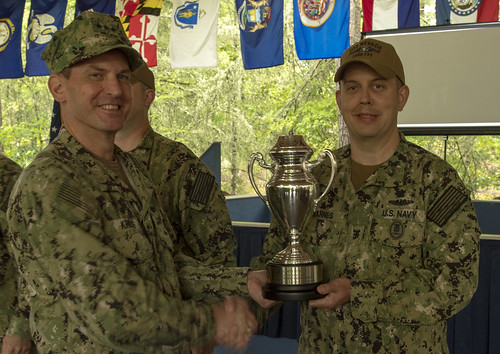 SILVERDALE, Wash. - The U.S. Strategic Command (USSTRATCOM) Omaha Trophy was presented to the Blue and Gold crews of USS Nevada (SSBN 733) during a ceremony held at Naval Base Kitsap-Bangor, Aug 21.

"It's a justification of the hard work and effort that we put in every single day,” said Cmdr. Edward Fultz, commanding officer of Nevada's Gold crew. “It reinforces the fact that what we do, even the small things, matter and they accumulate over time."

Vice Adm. David Kriete, deputy commander, USSTRATCOM, presented the award to the commanders of Nevada on behalf of the committee and the citizens of Omaha, Nebraska.

"Rating and divisional qualifications are held to a very high standard through the constant training," said Electronics Technician (Navigation) Seaman Seth Williams, assigned to Nevada. "Through all that training, we still maintain a family-like atmosphere where no one is a stranger and we can rely on each other which makes for better teamwork.”

“The strategic deterrence approach that we lead at USSTRATCOM is really about integrating all the capabilities that we have available to us in a way that will best convince any potential adversary, today or in the future, that they best not cross that line against the U.S. or our allies,” said Kriete.

Nevada is one of eight Ohio-class ballistic missile submarines homeported at Naval Base Kitsap-Bangor. 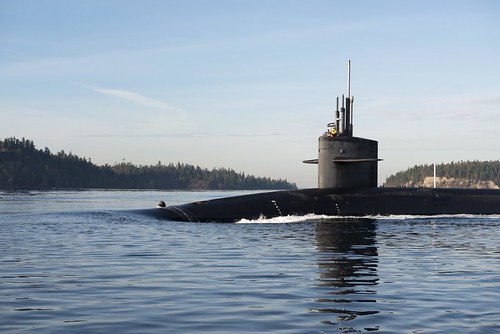 In this file photo, USS Nevada (SSBN 733) transits the Hood Canal as the boat returns to its homeport at Naval Base Kitsap-Bangor following a strategic deterrent patrol in 2017. (U.S. Navy/MC1 Amanda R. Gray)