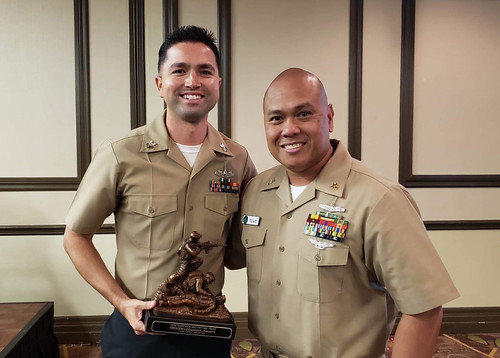 SASEBO, Japan - Hospital Corpsman 1st Class Edward Navarro, of Riverside, California, serving aboard mine countermeasures ship USS Chief (MCM 14), was selected by the Bureau of Medicine and Surgery (BUMED) as the 2018 Surface Independent Duty Corpsman (IDC) of the Year.

The IDC of the Year award was established to recognize excellence in the Navy’s highly trained enlisted health care providers who operate aboard ships and submarines at sea worldwide without the direct supervision of a licensed physician.

“There are a lot of really amazing IDC’s in the Navy, so it is very humbling to be counted among them,” said Navarro when asked how he felt about being selected. “I really do owe my success to the people on Chief.”

Navarro says that he wanted a challenging assignment and found it on the forward deployed minesweeper but admits that even though his title starts with “Independent” teamwork is still important.

“When you are part of a team like this, you are never really alone,” he said. “I wanted the challenge of independent duty and felt I could best achieve this at sea rather than ashore.”

IDCs are trained in the clinical and management skillset and play a critical role in maintaining the health and morale of the unit where they are assigned. Navarro’s recognition shows that his hard work has made him a role model in the corpsman community.

Part of Navarro’s selection can be attributed to the challenging range of duties, from multi-national mine exercises in the forward deployed naval force, to managing medical readiness inspections and successfully completing the Board of Inspection and Survey (INSURV) with above average scores.

Looking forward to making the Navy a career, Navarro says he plans to explore other operational settings and take full advantage of what the Navy has to offer.

“To anyone considering being an IDC, expect it to be challenging, but it is also a very rewarding career.”