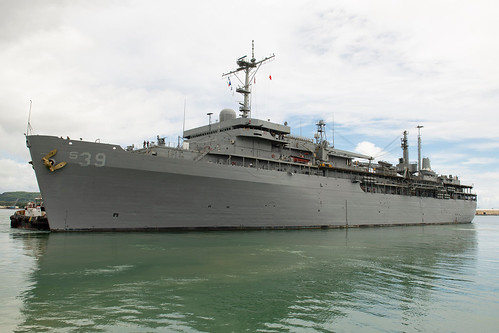 Land’s arrival in the land “down under” marked the first port call of her 2019 deployment.

“I’m grateful we are able to stop in Darwin,” said Capt. Michael D. Luckett, Land’s commanding officer. “This is a great opportunity for Sailors to not only experience a new country, but for us to build upon our already strong alliance with Australia.”

Darwin, a major port city and the capital of Australia’s Northern Territory, holds special significance to both the Australian and U.S. navies, said Luckett.

“The Battle of Sunda Strait, northwest of Darwin between the islands of Java and Sumatra, was a critical battle for both the United States and Australian navies during World War II,” he explained. “The tragic losses of the USS Houston and HMAS Perth are an important piece of naval history and hold a shared place of reverence between us and our Australian allies.”

Land was the first of the Navy’s newest class of submarine tenders, designed (but not limited) to support Los Angeles class fast attack submarines. The ship is able to provide nearly any service – from maintenance and hotel services to expeditionary logistical support – to submarines and surface ships in the U.S. 5th and 7th Fleet areas of operation.

Land Sailors, especially those who had never been to Australia, are excited to visit the city and enjoy its various cultural activities. During their port visit to Darwin, Land Sailors will also participate in a variety of community relations events and leadership engagements.

“I’ve wanted to go to Australia for a long time,” said Boatswain’s Mate Seaman Luke Davis. “I never thought I’d make it here and I am so excited to check it out and see what the country has to offer.”

Guam is home to the U.S. Navy's only submarine tenders, Emory S. Land and USS Frank Cable (AS 40), as well as four Los Angeles-class attack submarines. They are operationally assigned to Commander, Submarine Group 7 in support of submarine activities and theater security cooperation efforts in the Indo-Pacific region.