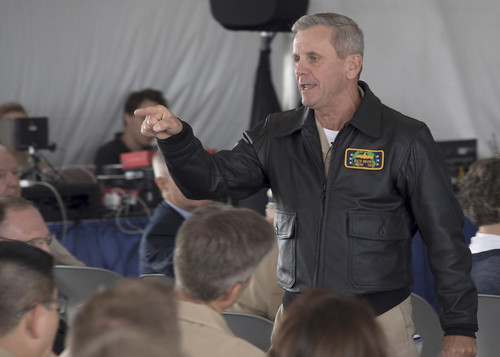 The theme of the professional development event was “Lethal and Tough in Today’s Fight,” which transitioned well from the focus of the Surface Warfare Flag Officers Training Symposium (SWFOTS) held a week before.

“During SWFOTS, we discussed establishing policies and providing funding to support our commanding officers’ efforts to build combat ready ships and battle-minded crews,” Brown said in his address. “SNA West is taking those combat ready ships and battle-minded crews and talking about being lethal and tough in today's fight. We don't build readiness for readiness' sake. We build readiness to get our ships underway, and, when required by our Nation, go forward, fight, win and come back home. To do that, we have to be lethal. We have to be tough, if we're going to win today's fight.”

Brown cited real-world examples of why crews need to be ready because of the return of the era of great power competition and similarities to the Cold War. He reminded the audience of last October when a People's Republic of China Luyang destroyer approached the guided-missile destroyer USS Decatur “in an unsafe and unprofessional maneuver in the vicinity of Gaven Reef in the South China Sea," according to a statement issued by U.S. Pacific Fleet. He also noted a June 2019 incident in the Philippine Sea, where Russian destroyer (UDALOY I DD 572) made an unsafe maneuver against the guided-missile cruiser USS Chancellorsville (CG 62), closing to about 50-100 feet, putting the safety of her crew and ship at risk.

“So we have to be lethal,” Brown said. “We have to be tough because we don't know when we're going to go into the fight. The fight could happen tomorrow, next week, or three years from now. But if we're not preparing now, we won't be ready. But I have no doubt that we are ready.”

Brown emphasized the U.S. Surface Force is second to none and that we also control the sea and provide credible combat naval power to our nation, when and where needed.

“There is no other Surface Force like the United States Navy Surface Force. It is time for us to act that way,” Brown said.