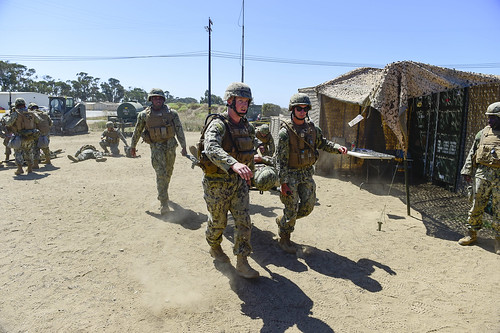 “For this exercise, we’re working to ensure the battalion can operate in an austere environment on its own while running off its own equipment,” said U.S. Army Cpt. Jeffrey Ginther, from Carmel, Indiana, NMCB-3’s assistant operations officer. “We can fortify our camp and provide our own power while emphasizing training to enhance our C2 capabilities with our tactical headquarters and tactical operations center training to handle whatever missions may come our way while operating in such an environment without outside support.”

CPX-2 included critical real-world training events such as communicating with tribal leaders, a mass casualty, and a chemical, biological, and radiological attack – all of which require Seabees to lean on their training and respond appropriately.

“CPX-2 had a very similar focus as CPX-1,” said Ginther. “It was centered around the C2 capabilities of the battalion. Since CPX-1, various watch teams have worked together to refine their procedures and to grow as a team. This iteration was a crucible using more complex and stressful scenarios to test the watch teams.”

“These things happen quickly and we’re tested on how well our first responders react,” said Wembakpete. “They need to be quick to render aid and transport patients to a triage point where they can be assessed based on how critically they are injured so that we can get them the care they need. On top of that, we need to make sure we’re accurately tracking the patients and evacuations and reporting those statuses back to the tactical headquarters and combat operations center.”

Wembakpete said the scenario proved challenging to more junior Seabees with limited experience and emphasized the importance of training and exercises.

“The biggest takeaway is to keep training and have a mindset to always be ready so that when the time comes you can remain calm and let that training take over to allow you to respond quickly and proficiently,” said Wembakpete. “That’s what will save lives.”

Ginther shared Wembakpete’s sentiments and said that he saw the training pay off first hand.

“The Seabees participating in the exercise worked well as teams to adapt and overcome all the challenging scenarios which were placed before them,” said Ginther. “There was so much improvement that if one were to look at the teams at the beginning of CPX-1 and the teams at the end of CPX-2, they may question if it was the same battalion.”

Each company within the battalion was entrusted with an area of responsibility in order to effectively defend the camp and perform their specialties.

Headquarters Company is responsible for maintaining C2, and acts as the central hub of communications and tasking for the battalion. While Seabees in Alfa and Charlie Companies take care of civil engineering support equipment and vertical construction, Bravo Company focuses on camp maintenance and security – these Seabees make up the quick reaction force, which enforces the camp’s defensive perimeter. Finally, Air Detachment, a company that is prepared to mount out in response to major combat operations within 48-hours, was co-located with the battalion for the exercise while training and planning for a real-world response.

NMCB-3 will use the lessons learned during the exercise to formulate creative solutions for follow-on CPXs as well as the battalion's upcoming FTX.

NMCB-3 is homeported in Port Hueneme.