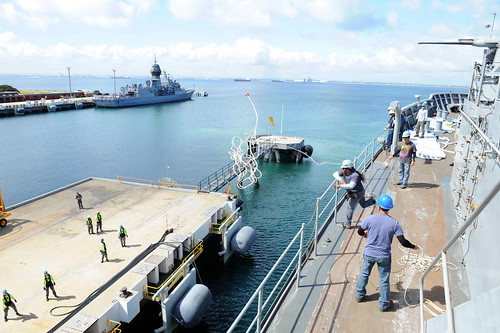 This is Land’s second port visit during its Indo-Pacific winter patrol. The ship departed its homeport Guam homeport, Aug. 19.

The combined Navy and civilian mariner crew will spend the next several days conducting bilateral training with the Australian Submarine Force, as well as seeing the sights of southwestern Australia, enjoying the culture, and interacting with the Royal Australian Navy (RAN) in the spirit of friendship and camaraderie.

“The crew is very excited about this visit to Fremantle,” said Land’s commanding officer, Capt. Michael D. Luckett. “We just finished a week-long visit to Darwin, which was a remarkable port visit. Now, we are ready to train and share ideas with our allies. Port visits and joint training like this ensure both the U.S. Navy and Royal Australian Navy maintain a high level of interoperability between our forces.”

During the port visit, the crew will have the opportunity to not only work in conjunction with the RAN submarine force, but also participate in several community outreach projects including a Morale, Welfare and Recreation (MWR) soccer tournament between Emory S. Land Sailors and RAN teams.

“MWR outreach events are a great way for Sailors and civilian mariners to branch out and interact with the community outside of work,” said MWR President, Gunner’s Mate 2nd Class Heather O’Neill. “Playing sports together is one of many ways we build relationships with the community and strengthen our partnership with the host nation.”

This visit to Fremantle is an exciting one for the crew because it’s an opportunity for a peacetime exchange of information and training between two close allies.

“Our visit serves as an example of the strong and long-lasting partnership that exists between the U.S. and Australia, and emphasizes our shared dedication to supporting regional stability,” said Luckett. “Australia is one of our closest allies in the Indo-Pacific. Our partnership is a key element of peace and stability in the region.”

The U.S. routinely demonstrates its commitment to allies and partners through forward presence and operations. Land’s deployment to the U.S. 7th Fleet area of operations reflects the United States’ commitment to support theater security cooperation efforts in the Indo-Pacific region.