The boaters, missing since Sept. 8, were located by a U.S. Navy Task Force 72 P-8A Poseidon aircrew from Patrol Squadron (VP) 5, 224 statute miles east northeast of Satawan Atoll and were then rescued by the crew of the patrol vessel FSS Micronesia. The rescued boaters were brought to Pohnpei to meet emergency medical personnel for evaluation, reportedly arriving in good health despite drifting for 145 hours.

“It’s a beautiful thing when multiple nations, agencies, and services develop a plan and successfully execute a multiday search covering thousands of miles to locate all survivors and return them safely to their loved ones,” said Chief Corley Myres, a Joint Rescue Sub-Center (JSRC) Guam watchstander.

At 5:20 p.m., Monday, JRSC Guam watchstanders received a report from the Federated States of Micronesia Police stating four adults and three children were overdue while transiting 16 miles from Lukunor Atoll to the Satawan Atoll. The FSM Police deployed their patrol boats to search while JRSC Guam watchstanders deployed an Air Station Barbers Point HC-130 Hercules from Hawaii and requested additional support from the Navy and Air Force.

Involved in the six-day search were crews from:

Throughout the multiday search, JRSC Guam watchstanders coordinated with technical experts and response crews to refine the search area. The HC-130 Hercules deployed self-locating datum marker buoys to determine the movement of the ocean currents in the area. That data was incorporated into search planning to improve the drift models and increase the chances of locating the vessel.

On Saturday afternoon, while executing a search plan developed by JSRC Guam watchstanders, the Poseidon aircrew successfully located the adrift vessel and vectored in the FSS Micronesia who rescued all seven boaters.

The weather throughout the region was a challenge during this case with 7 to 8-foot seas, strong winds, and frequent rain squalls.

“This case is a testament to the importance of our strong relationships throughout the Pacific region,” said Lt. Cmdr. Tory Saxon, a JSRC Guam search and rescue mission coordinator. “Through coordination with our partners in the Federated States of Micronesia, good Samaritans, and our fellow service members from the Navy and Air Force we were able to a bring this case to a successful conclusion. Thank you to everyone that contributed to the successful outcome of this search and rescue case.”

VP-5, based in Jacksonville, Florida, is operating out of Kadena Air Force Base in Okinawa, Japan. The detachment is conducting maritime patrol and reconnaissance as well as theater outreach operations within U.S. 7th Fleet area of operations. 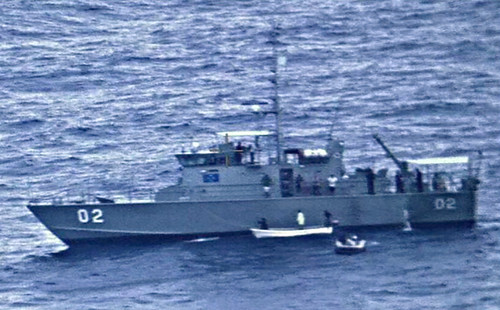 A small white boat used by a group of seven stranded mariners is tied to the patrol vessel FSS Micronesia (02) during a rescue mission, Sept. 14. (U.S. Navy photo) 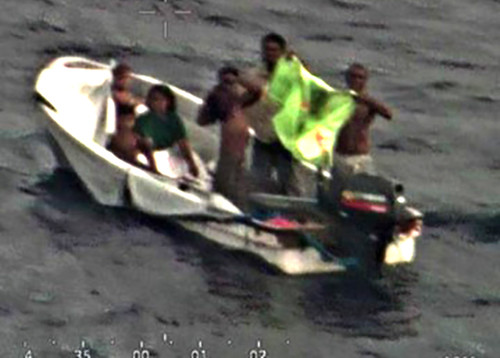 The group of stranded mariners as seen through the cameras of a U.S. Navy P-8A Poseidon aircraft, Sept. 14. (U.S. Navy photo)