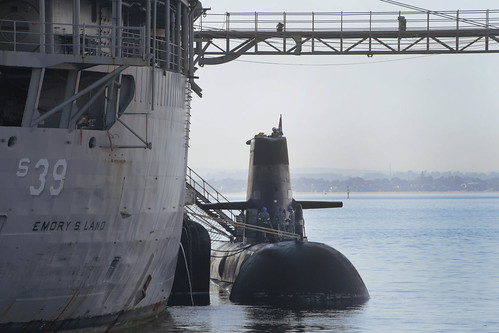 The training involved inert ordnance handling between Land and Sheean, demonstrating the interoperability of the two navies. Land also provided shore power and fuel to Sheean.

“It was an excellent example of how well our two navies work together and exchange best practices,” said Capt. Michael D. Luckett, Land’s commanding officer. “We learned a lot from how the Australian forces operate today and how working together can strengthen our partnership and expand our capabilities in this area of operations.”

The evolution was a success, reaffirming that Land can fully support allied navies when necessary.

“It was a great demonstration of teamwork between the American and Australian navies,” said Lt. Michael J. Atterbery, Land’s weapons officer. “Once again it proves that we can work together and complete the mission as a combined force.”

Sailors from Sheean and Land flawlessly completed all scheduled tasks during the evolution. Both U.S. and Australian service members also had opportunities to share information and best practices.

“From our end we demonstrated taking charge of the weapon and embarking it,” said Lt. John Lee, weapons electrical engineer officer aboard Sheean. “I’ve worked with the U.S. Navy before, but there’s generally not been as much face-to-face time as there was today. My experiences working with the U.S. Navy have always been rewarding, I’ve always found the teams professional and we’ve always worked well together.”

Sheean is stationed in Fremantle and is the fifth of six Collins-class submarines in the Royal Australian Navy.