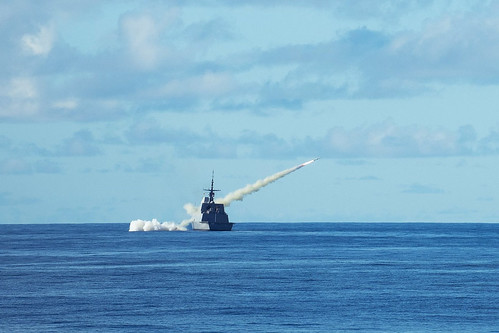 Units from the U.S. and Republic of Singapore Navy participated in the sinking exercise (SINKEX), which provided them the opportunity to gain proficiency in tactics, targeting and live firing against a surface target at sea.

“This exercise provided important opportunities for realistic at-sea training with live ordnance, conditions that cannot be duplicated otherwise,” said Capt. Matthew Jerbi, commodore of Destroyer Squadron 7 and co-commander of the Task Group for the exercise. “Training alongside our Singapore partners in a complex exercise like this is invaluable.”

RSN Commander First Flotilla and commanding officer of 185 Squadron, Colonel Lim Yu Chuan highlighted the value of the exercise in enhancing professionalism between the two navies.

“Exercise Pacific Griffin is a valuable platform for the two navies to strengthen our mutual cooperation and interoperability,” said Lim. “With the vast training space available in the waters off Guam, the exercise also provides the RSN with the opportunity to conduct high-end exercises of substantial scope and complexity.”

Former U.S. Navy vessels used in SINKEXs, referred to as hulks, are prepared in strict compliance with regulations prescribed and enforced by the Environmental Protection Agency under a general permit the U.S. Navy holds pursuant to the Marine Protection, Research and Sanctuaries Act.

Each SINKEX is required to sink the hulk in at least 1,000 fathoms (6,000 feet) of water and at least 50 nautical miles from land. Surveys are conducted to ensure that people and marine mammals are not in an area where they could be harmed during the event.

Prior to the vessel being transported for participation in a SINKEX, each vessel is put through a rigorous cleaning process, including the removal of all polychlorinated biphenyls (PCBs), transformers and large capacitors, all small capacitors to the greatest extent practical, trash, floatable materials, mercury or fluorocarbon-containing materials and readily detachable solid PCB items. Petroleum is also cleaned from tanks, piping and reservoirs.

Additional aircraft was present during the SINKEX to ensure safety precautions were taken for other potential aircraft and boats within the range area.

Towed to waters near Guam from Washington State, the former USS Ford was a Oliver Hazard Perry-class guided missile frigate, decommissioned in 2013 after more than 28 years of service. The ship was named for Gunner's Mate Patrick O. Ford, who was awarded the Navy Cross posthumously for his heroism as a patrol river boatman in the Vietnam War.

The U.S. and Singapore work together on several initiatives and conduct regular personnel exchanges, routine participation in bilateral and multilateral exercises, such as SEACAT and RIMPAC, as well as combined operations such as multi-national counter-piracy.

As U.S. 7th Fleet's executive agent for theater security cooperation in South and Southeast Asia, Commander, Task Force 73 and Destroyer Squadron 7 conduct advanced planning, organize resources, and directly support the execution of CARAT and other engagements in the region. 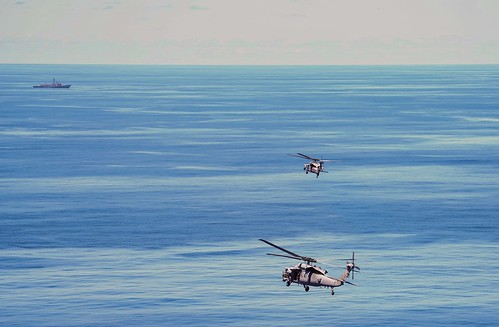 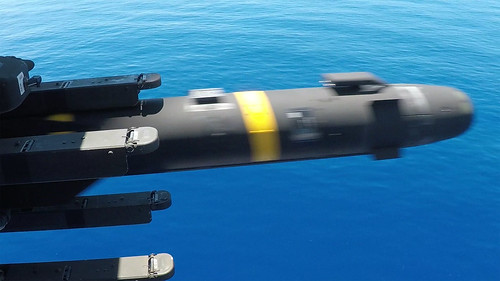 An AGM-114 Hellfire missile is fired at the former USS Ford (FFG 54) from an MH-60S Sea Hawk assigned to Helicopter Sea Combat Squadron (HSC) 25 during the SINKEX. (U.S. Navy/MC2 Christopher A. Veloicaza) 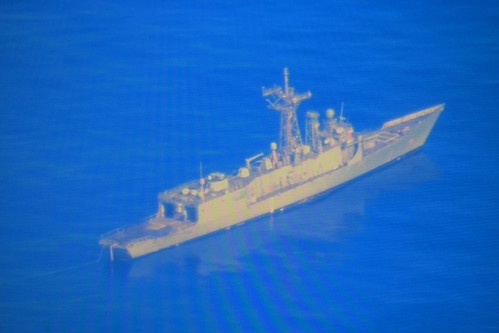 An aerial view of the former USS Ford (FFG 54) during the SINKEX. (U.S. Navy photo)