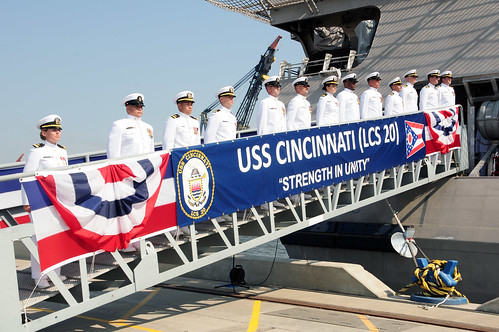 More than 1,400 guests attended the ceremony for the fifth ship in naval service named for Cincinnati, the third-largest city in Ohio.

“From acquisition to construction, to testing and certification, she is a marvel of engineering that will extend our capabilities for any mission, from the middle of the ocean, to the shallowest of waters, enhancing our ability to project power at shore and at sea,” said principle speaker U.S. Rep. Brad Wenstrup of Ohio. “The USS Cincinnati will extend the maneuverability and lethality of our fleet to confront the many challenges of our complex world.”

“Each and every day, our ships sail alongside those of our Allies and partners, defending freedom, deterring aggression, and ensuring adherence to the rules which underwrite the greatest signal to our allies and our partners and best warning to our adversaries” said Foggo. “Naval presence is essential to our National Defense Strategy and to a peaceful, connected, and prosperous world.”

Cincinnati commanding officer, Cmdr. Jedediah Kloppel, reported to Foggo that the ship was ready and in his command. In addition, Penny Pritzker, the 38th U.S. Secretary of Commerce and the ship's sponsor, gave the traditional order to “man our ship and bring her to life!”

“This is the first crew in naval history to commission two ships in less than two years. This is the best crew I’ve ever served with,” said Kloppel. “From the start of this crew's journey, they have excelled. They achieved the highest scores and completed certifications early and inspections the first time, every time. It’s the unit cohesion, that special bond, that strength and unity that makes this a great crew.”

Kloppel took command of Cincinnati during a change of command ceremony, Oct. 3.

Fundamental to this approach is the capability to rapidly install interchangeable mission packages (MPs) onto the seaframe to fulfill a specific mission and then be uninstalled, maintained and upgraded at the Mission Package Support Facility (MPSF) for future use aboard any LCS sea frame.

Seventy officers and enlisted personnel make up the crew of Cincinnati, which will be homeported in San Diego. 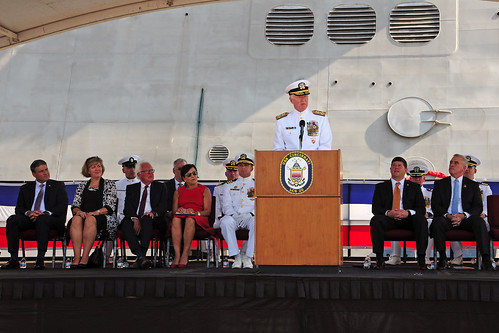 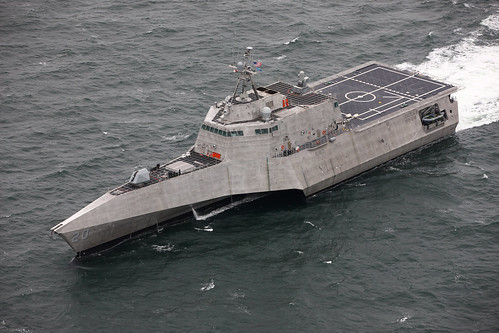