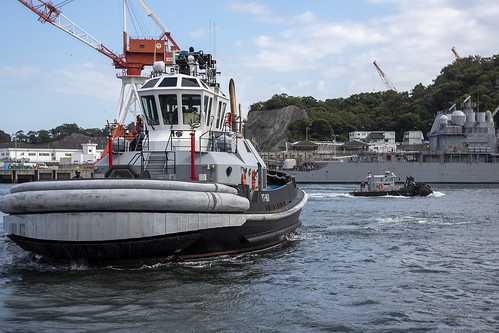 Living up to its name, Hagibis is Tagalog for “velocity" or “swiftness,” and it took less than a day to reach super typhoon status with the Joint Typhoon Warning Center stating that the sustained winds have been up to approximately 270 mph since it began developing in the Pacific.

One month ago, Sept. 9, Typhoon Faxai hit the Kanto Plain area and was to blame for three deaths, 40 injuries, left 17,000 people stranded at Tokyo airports, and caused millions of dollars in damage to homes, buildings and infrastructure.

“The good thing is there was a lot of lessons learned from that (Typhoon Faxai),” said CFAY’s Command Master Chief Derek Mullenhour in an email to all hands.

Mullenhour outlined safety measures to take prior to the storm from putting away everything that is outside your home that could become missiles in high winds; parking your car in a safe area; staying in your home during the storm; waiting for the all clear signals before leaving your safe place to being very careful after the storm in picking up items that blew or washed into yards.

The base is following Tropical Cyclone Conditions of Readiness (TCCOR) which are graduated states of readiness from TCCOR-5, indicating that destructive winds are expected within 48 hours to TCCOR-1, a 12-hour window prior to the storm’s arrival. Once the storm passes, the TCCOR-1 status will change to recovery, and finally, an all clear will be issued.

CFAY’s Naval Security Force (NSF) is using lessons learned from Typhoon Faxai to improve communications before, during and after the storm passes the base.

“We’ve updated all of our recall lists and will start blocking streets when we hit TCCOR 1,” said Master-at-Arms Petty Officer 1st Class Joel Brown, NSF’s assistant anti-terrorism officer. “We also have rooms in the Transient Personnel Unit barracks for watch personnel, so, they will be on the base ahead of the storm.”

Pierside, CFAY’s port operations department also is bringing forward what was learned from Typhoon Faxai and putting in extra hours to prepare.

“We sortied the fleet, so we sent several ships out to sea, including allied partners, and diverted incoming ships to areas away from Yokosuka and the storm’s path,” said Cmdr. Anthony Matos, CFAY’s port operations officer. “We got a lot of stuff into Dry Dock 6, including John S. McCain, for safe haven.”

Matos explained that his crew of more than 50 Sailors and nearly 50 Japanese civilian workers have been optimizing the harbor to basically weather the storm by seeing how to best preserve the infrastructure while maintaining safety. They are doing this by installing storm brows, repositioning shore power cables, and removing all moveable items off of the piers.

“My biggest concern at this point is to prevent loss of life,” added Matos. “So every reaction we have, everything we do is going to be focused on this one overarching objective – I want to keep my folks, Sailors, everyone on the waterfront safe.”

The damage that was done on CFAY by Typhoon Faxai included downed trees, broken windows, flooding, and some damage to the piers and sea wall with about 100 tons of debris collected in the days following the storm. Luckily, no injuries on base were reported.

"We are preparing for this storm with the belief that one of this strength has not been seen in Yokosuka for several years," said Capt. Rich Jarrett, CFAY's commanding officer. "All the lessons learned during the last typhoon are being applied, and then some, to safeguard personnel and our assets."

CFAY provides, maintains, and operates base facilities and services in support of the U.S. 7th Fleet's forward-deployed naval forces, 71 tenant commands, and more than 27,000 military and civilian personnel and their families.