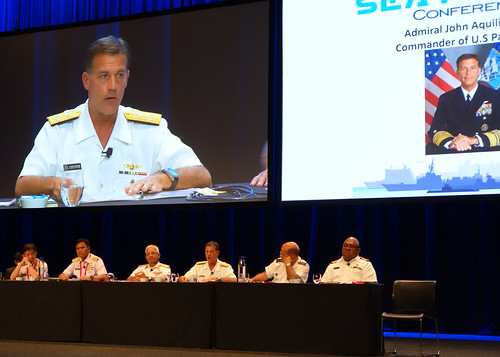 SYDNEY - The commander of the U.S. Navy’s Pacific Fleet spoke at an international conference in Sydney, Oct. 8, expressing support of the Royal Australian Navy’s focus on building a strong, capable navy.

“I fully support the work the Royal Australian Navy has been doing to ensure they have the capacity and capability to meet the rising tide of challenges in the Indo-Pacific,” Aquilino said. “Investing in 21st century frigates and attack submarines – and sufficient numbers of Sailors who can fight them – will benefit a free and open Indo-Pacific.”

Aquilino’s remarks focused on competing domestic priorities throughout the region, and encouraged all attending nations to remain focused on the importance of both individual and collective security.

“There is no doubt that nations who have embraced the international rules-based system have enjoyed shared prosperity, and will continue to do so,” Aquilino said. “No single nation who calls the Pacific Ocean home can or should dictate terms to others here.”

Aquilino also had bilateral discussions with naval leaders from France, New Zealand, Chile, Australia, Malaysia, the Philippines, India, and the United Kingdom. Those conversation focused on the success of recent bilateral and multilateral exercises, and the importance of partnering in future operations.

“We exercise and operate together with familiarity,” he said. “Being ready militarily is important – and the vast majority of nations here are investing in the winning approach of working together.”

The sea power conference was held in conjunction with the biennial Pacific International Maritime Exposition, an event where commercial and military maritime organizations promote their capabilities to worldwide naval leaders.

The U.S. and Australian navies share a long history of cooperation and interoperability. Most recently, Exercise Talisman Sabre ’19 had 36 ships and more than 25,000 Sailors from Australia, Canada, Japan, and New Zealand.

Aquilino touched on the importance of further strengthening that long-standing relationship.

“As allies and partners, we’re growing stronger,” said Aquilino. “Together, the people in this room can and must insist on a free and open Indo-Pacific.” 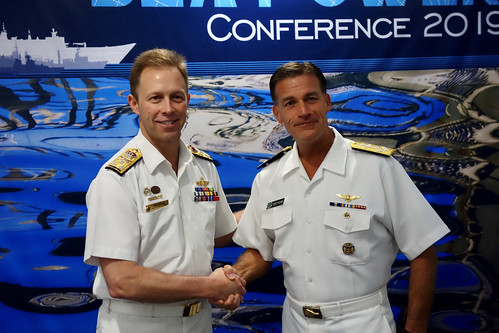