From Secretary of the Navy Public Affairs 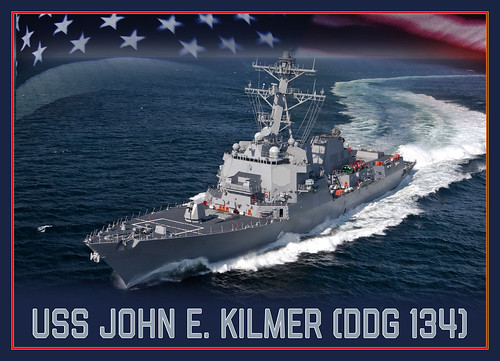 WASHINGTON - Secretary of the Navy Richard V. Spencer named a future Arleigh Burke-class guided-missile destroyer, DDG 134, in honor of U.S. Navy Hospitalman John E. Kilmer, who was awarded the Medal of Honor for his service during the Korean War.

“Hospitalman Kilmer was a hero whose efforts during the Korean War continue to inspire,” Spencer said. “His dedication to his teammates represents everything good about our integrated Naval force.”

A medical field technician with the Fleet Marine Force, Kilmer was posthumously awarded the Medal of Honor June 18, 1953. He was killed Aug. 13, 1952 as a result of enemy action while caring for the wounded during the attack on Bunker Hill. He shielded another man from enemy fire with his body and was mortally wounded.

From Kilmer’s Medal of Honor citation, “With his company engaged in defending a vitally important hill position well forward of the main line of resistance during an assault by large concentrations of hostile troops, Kilmer repeatedly braved intense enemy mortar, artillery and sniper fire to move from one position to another, administering aide to the wounded and expediting their evacuation.”

Kilmer was born in Highland Park, Illinois, and enlisted in the U.S. Navy in 1947 as an Apprentice Seaman in Houston, Texas. Kilmer was serving with a Marine rifle company in the First Marine Division at the time of his death. He had previously served aboard USS Repose (AH 16) and at multiple locations in California.

Arleigh Burke-class destroyers conduct a variety of operations, from peacetime presence and crisis response to sea control and power projection. The future USS John E. Kilmer (DDG 134) will be capable of fighting air, surface and subsurface battles simultaneously and will contain a combination of offensive and defensive weapon systems to support maritime warfare, including integrated air and missile defense and vertical launch capabilities.

USS John E. Kilmer will be constructed at Bath Iron Works, a division of General Dynamics in Bath, Maine. The ship will be 509 feet long, have a beam of 59 feet and be capable of operating in excess of 30 knots.